I could really use your help with my latest short film project, Echo. We are seeking completion funds for it, over at Indiegogo...

It's been a while since I have been on the boards. I have been busy for the past two years preparing to build vortex42studios. This involved moving from Scotland to Denmark, finding a suitable property, a lot of preparation work and then finally the construction itself. I'm happy to say that vortex42studios are now nearing completion!

I have completed principle photography, and I am ready to move the film into Post Production. However, the money I had available to do this, was recently swallowed up by the final construction bill for the studios. So, now the studios are fully paid for, but I don't have the resources needed to let me focus on Echo's Post work.

So, for I am running an Indiegogo campaign to try and raise the funds needed to pay for foley, a musical soundtrack, creature effects and festival submission costs amongst other things. And, I am reaching out to you for help. It's my hope that the stop motion community can help me get this film completed.

In the Indiegogo campaign we are offering some truly unique perks/rewards to go alongside the warm fuzzy feeling you will get by contributing and helping launch the film.

I hope you'll take a look at the campaign pitch video, and contribute anything you can - Even £5 will help - And sharing the campaign with people will also help. 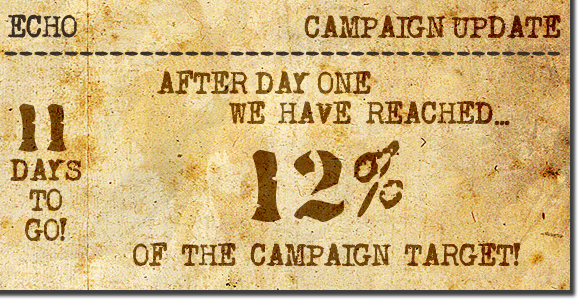 After the first day of campaigning we have 12% of our target. It's a flexible campaign, so any money raised during the 12 day campaign will help move the film forward. But, the higher we get that amount to, the better we can make the film.

The music willl be made by Brett McCoy. :)

If you have any questions about the project, please fire away! :)

And, at the start of this week, I created a brand new example of modern dynamation using my Zip Vortex puppet and crashed Starship miniature. I did the live-action, animation and compositing on this example...

And, to show you what's been keeping me busy all this time, please take a look at this folder showing photos from during construction of vortex42studios. I did a lot of the work building them myself to save money...

This is the floor plan for the studios, showing that the place has everything needed to produce full scale projects of many kinds... 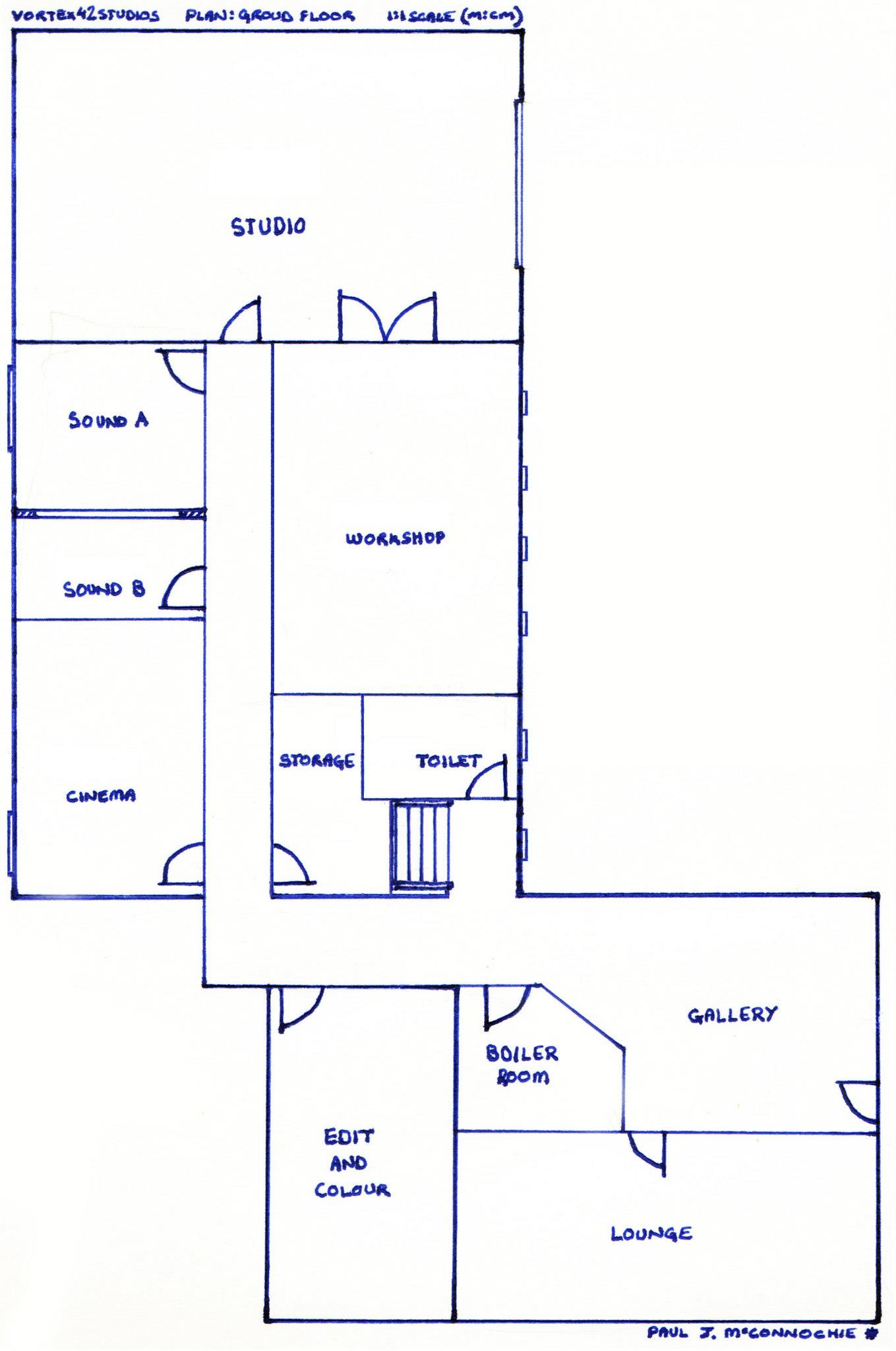 And, this is a photograph of the large studio room. The build is nearing completion. The builders are coming in, to put in the doors, and tile the floors. The last thing then will be to switch on the electricity, and then vortex42studios is up and running! Here is the first video update for the campaign - This video is to give a quick update, and illustrate that every single contribution matters, and moves the project immediately forward.

Thanks to Roos, for becoming the ninth in our band of contributors! :)

Hello all - Here is a new video update, where I get started preparing for a test sculpture for a potential design for the Echo Creature. I also use this opportunity to remind you all of the superb perks we have on offer, including Downloads and...

The perks stack, meaning the higher the perk you choose, you get ALL of the perks from the lower tiers as well! So, please consider donating... And, if you can, joining us as a Producer.

Wow! Echo got a write up over on the hugely respected StopMotionWorks website (www.stopmotionworks.com/news/), run by the Gandalfic, Lionel Ivan Orozco, who is a true Titan of the stop motion world.

Lio created armatures on some of the most recognised stop motion animated productions of all time. It's an honour to be included on his News site!

With Echo, we went flying past the 25% mark towards our funding target today.

And, I want to give a special mention to the contributor who actually sent us over that 25% mark, and put us on this new milestone... "StopMotionAnimation.com", as run by Anthony Scott! Thankyou so much Anthony, and "www.stopmotionanimation.com" for your continued support for the project. 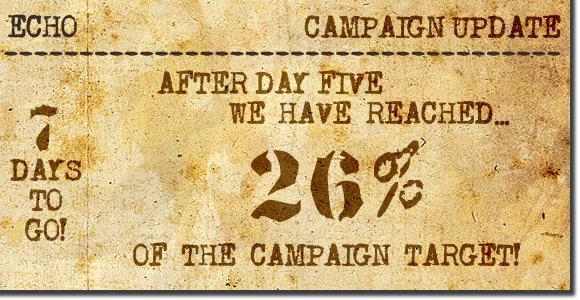 We have reached the half-way point in this short campaign. There are six days left to go, and we have reached 27% of our target funding.

I am so encouraged by the support people have been showing for the project, myself, and the campaign. The following six days are crucial for the film, and so I am going to be putting out some new bits and pieces over the coming few days to drum up some more interest in the project.

It’s my hope you’ll join me in spreading the word about the project, and pushing towards that target funding goal.

Tomorrow, I will post a little video about the process I’ve been going through in building vortex42studios… The upcoming completion of the studios is the very reason Echo is being made – To celebrate a process which has taken several years of planning, and several months of constant building work, to achieve.

Once again – At this half-way marker – Thankyou for your continued support!

Brett and I wish our very best to Justin and Shel, who have just started their own Kickstarter Campaign for Dogonauts - Go for it guys! 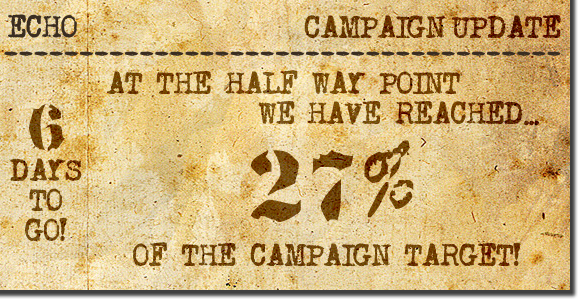 Hello - Here is the third video update for the Echo Campaign on Indiegogo. Five days left to go

People - This next few days, is when I really need to ramp up support for the project. If there is anything any of you can do, be it a contribution or helping get the word out to interested people, this is the time to be doing it. Let's make the next few days count for Echo. :)

This video update is about building vortex42studios. Please contribute if you can, to help me mark the completion of the studio construction, with this unique short film featuring stop motion animated creature effects. :)

Hello everyone - Here is a new video update for the Echo Campaign. This is a recap on how the campaign is going, and a chance for you to meet Teddy, The Studio Cat!

Tomorrow I am doing a Q&A about the project, so if you have any questions, get them to me here or elsewhere, and I'll endeavour to answer them. :)

Hey Paul, I've got a question about the campaign that other contributors might need answered as well, so I'll ask here rather than privately - and I've already scoured Indiegogo with no luck.

Where/how do we go about accessing downloads like production diaries etc? I was assuming they'd show up in the gallery on your campaign page, but if not then I don't want to just miss out completely because I'm clueless!

Will they just show up one by one in the gallery as you add them, or is there someplace I need to go to find them? Do I maybe need to create an Indiegogo account and log in to see them?

That's a great question - I will answer that in tonight's video. Thanks for that, Strider.

Oh that's right, tonight is the Q&A! It didn't even occur to me to send it to you for that - I guess it's just lucky timing! Alright, awesome. See ya there!