I've been working on a set for a kitchen and would like to include some glass and/or plastic items - glasses, soap bottles, etc.

I've been working with sculpey, epoxy, and wood for most of the other appliances and dish wear but haven't figured out how to tackle the glass and plastic / transparent pieces. Does anyone have any suggestions?

maybe bioplastic? I haven't looked into it much, but I believe you can make your own, I'm pretty sure you can make is clear, like glass.

You should look into it, there are some tutorials on how to make it on Youtube.

Ah, very interesting. I'll have to give this a try. If I can create a mold for it, it might just work. Even if it doesn't though,- really interesting stuff. Thanks!

Sure, hope it works.

when I needed bottles and glasses for a pub scene, I turned the shapes on a lathe, made silicone moulds, and cast them in clear resin.   Those are the bottles I cast on the shelves behind the barman in the top photo, and one on the table in the bottom photo next to one of the glasses I made.

Recently I turned some bottles from green perspex rod for another member here.   You could also use clear perspex rod.

The bottles for my pub had a 1 piece mould, open at the bottom.  I had the mould upside down, and poured the resin in from the bottom.  The glass mould was in 2 parts, an outer mould and an inner one.  I think I had to partly fill the outer mould with resin, then lower the inner core into it until a bit of resin spilled over the top, and the flange around the outside of the core fitted into the flange on the outer mould.  I would get some air bubbles along the rim, which I sanded off after the cast was set and removed. 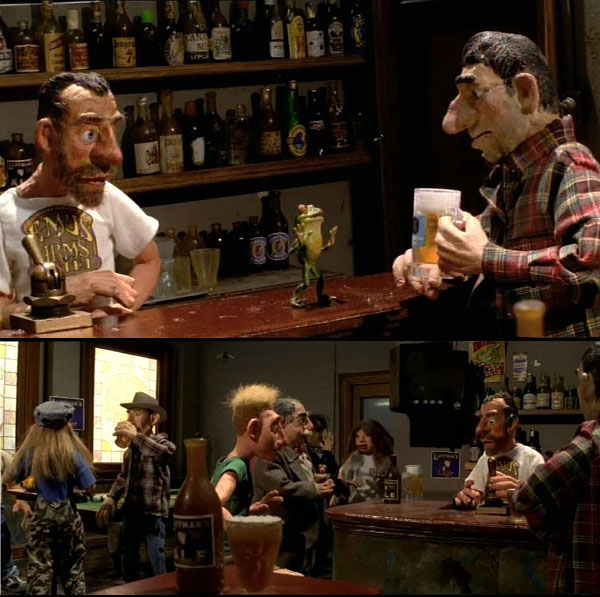 But there are some things out there you can buy, if you don't have access to a lathe.

I've found some bottles that were part of a fridge magnet, a crate of 6 bottles.  Another one was a keychain ornament.  Little novelty items often come in handy as props, but they tend to appear and disappear from shops, they aren't necessarily round when you need them.  The beer mug held by the bloke in the top photo was also a fridge magnet, with the beer cast inside as solid resin so he couldn't empty the glass, poor fellow.

Some of my glasses were the clear caps on pump action spray bottles, hair spray it might have been.  Others were on little spray bottles of Nilodor (room deodorant) spray.  They look good as straight sided, slightly tapering glasses. Look in the supermarket, see what you find.  Or discount shops.  They are good for 1/6th to 1/5th scale.

There are some accurate 1:6 scale bottles and wine glasses on ebay, made for action figures.  Look in the Military and Adventure section.  They tend to be made for WWII german scenes.

I got some big champaign bottles from the party supplies section of a discount store, filled with liquid fro blowing bubbles.  Too big for normal size bottles in 1/6th scale, but champaign does come in magnum, jeroboam and other huge sizes.

I did get some wine glasses made for Barbie type dolls, along with plates and cutlery, but that was years ago and I haven't found them again.  A lot of Barbie hand props tend to be a bit smaller than the 1:6 scale that her height would suggest, since she has tiny hands and feet. They came from a discount store with a big section for cheap toys imported from China.  For the same reason, I had to make slightly oversized cups and glasses to suit the big hands on my puppets.

Not cheap, but if you can get one, you can make a silicone mould and cast more.

Thanks, Nick. I haven't had access to a computer for a few days but I was able to check in from my phone. I don't have access to a lathe currently but have been on the prowl for all sorts of miniature odds and ends, novelty stores, etc.

Thanks for taking the time to help me out!

BTW, an easy trick I found if you don't have access to a lathe (other than finding and recycling objects) was to use beeswax molding blocks. When you handle the wax, it become pliable and you can shape it similarly to clay. Without body heat, it hardens back up and becomes more sturdy.

You probably wouldn't want to use this for objects you will be handling much, but if you need some background plastics or glasses, it works pretty well.

Short sections of acrylic tube can work well for glasses and cups. If you'd like them to flare towards the top, instead of just being cylindrical, you can heat up the end of the tube with a heat gun and work the end open with a tool. A sharpie works well.

Would molding them in silicone and casting in a clear resin be too expensive an option?

What worked for me was to sculpt them from super sculpy and make simple silicone block molds (just pour the mold box full and let it set up as a solid block, then slit it up one side afterwards, preferably in a wavy line - (google for tutorials if you haven't done it). Then cast your pieces using clear Epoxy resin. You can buy colored tints for it that will end up making it nice clear translucent. I just used a few tints - with amber and green for instance you can mix them to various degrees to get alight and a dark amber and different shades of green. Then if you need labels either download some real ones (you can find images online), modify them if you want, or design your own and print them up in miniature and glue them on.

That's for bottles or other items that can actually be solid inside (but still transparent of course). For glasses, if you need to see that they're hollow inside or put some liquid in there, you can use acrylic tubing. I need to see if I can find my notes - I believe you want extruded acrylic for cutting or any kind of machining, otherwise it will chip easily. If you search you'll find some good online suppliers for plastics that carry it in various sizes/shapes. If you need to color it, I've heard glass paint will work, though I haven't tried it myself. Cut it with a coping saw or jeweler's saw with a good fine blade, and then to really smooth the edges hold it in front of a paint stripping gun (heat gun). Be careful though - slightly too long and the plastic will start to bubble and it's ruined. You'll get the hang of it after trashing the first few.

And for a bonus - if you want to animate liquids - get some Quakehold! Museum Gel (the ! is part of the name.. ). Perfect 'slow water'. You can create shapes from it and they'll hold for a while, but they're actually sagging too slowly for the eye to see, so think of it as time lapse - each time you capture a frame it will have drooped a bit more, so if you time your frames fairly evenly it will look decent. It can be tinted, I think using the tints for the epoxy resin, though it takes a while to work it in thoroughly, kneading it wearing rubber gloves. Will doubtless stain anything it touches - so exercise caution.

Oh almost forgot - for the glasses I made bases by jamming the tubing down into a flat smooth bed of super sculpey (don't use standard modeling clay, it contains sulpher and might prohibit curing) and then pour a tiny amount of the clear epoxy resin in the bottom.

Hans Jacob Wagner replied to Tatu P's discussion Canon eos R or RP?
"I wouldn't jump on this right now. Seems there is some overheating issues. And it is also so…"
12 minutes ago

Hans Jacob Wagner replied to Alonso Soriano's discussion Cosclay
"Anyone tried this ?! Very intrigued - been using silkclay which is almost impossible to sculpt…"
24 minutes ago