How to make a Victorian Armchair and Range?

We are building a victorian cottage set at a scale of 1:7. We are unsure as to what to make an armchair and a range (Victorian cooker/oven) out of. 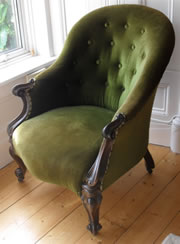 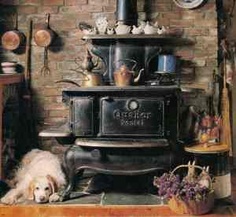 Our first thoughts were to make them out of Sculpey since we are familiar with it and its pretty easy to sculpt and bake.. not too sure if this is the best material though and if we were to go ahead with that, it would need to be bulked out with something but not sure what, aluminium foil isn't exactly sturdy to sculpt on top of.

The armchair in particular would have to be something sturdy since one of the puppets will be animated whilst sitting in it.

Any thoughts would be most appreciated! ^_^

The Victoria wingback chairin the photo is carved from balsa wood to 1/8th scale.  I took the measurements from an actual chair on an antique site. After carving and fitting each piece, I covered them with a double layer of t-shirt material. (The stripes were inked in before covering.) After covering, I glued all the pieces together. The legs and crossbars are carved from holly and stained. Light weight and sturdy, better, I think, than using clay.  If you like, I'll take a few more photos, close-up, of the underneath, etc.  Also have a look through Nick's photos and find a couple of really nice, leather-look, Victorian era chairs that , I think, he made from Styrofoam and wood. This is for Monsterous Murders, right?

Yes, I spread Apoxie Sculpt over styrene foam to get a leather look on my two 1:6 scale chairs. The chairs had a hard surface, the upholstery doesn't sink down if a puppet sits in it, which could be a minor drawback.   For a softer, pattern fabric finish, I would probably use a layer of sheet foam and actual fabric over that.  A stretch fabric, like the T-shirt material Dennis used, makes going around the curves much easier.

The chair you show has a curved back, so I would use something I can bend for the back.  You could have a flat wood base under the seat, possibly ply that is 12 mm thick.  That gives you something to fix the legs onto.  I used wood for the the back legs, but the curved front legs were Apoxie Sculpt over stiff coathanger wire.   You might need something similar.  (Apoxie Sculpt is a 2-part epoxy putty, with a longer working time than the stuff from the hardware, so you have time to sculpt the details.)  The back of that base piece would be cut in a curve, cut or sanded to an angle, so a piece of card fixed to the outside curve would lean out.  If necessary, glue a couple more layers of card onto it so it is laminated and stronger.

That curve also means that the fabric on the inside would just go straight across, unless you glue it down with spray glue to the foam and card.  (I use 3M No 74 Foam and Fabric glue.)

I made a chair like this with foam and fabric covering, just once and many years ago, and it was a much bigger scale for a hand puppet.  So Dennis is going to be your best guide here, he's worked at a smaller scale like you.

Now, the range -  I would do most of that with MDF.  The stovetop that overhangs has some moulding on it, so I would probably use 2 layers of 3mm MDF with one slightly bigger than the other, and the edges rounded, to get that moulding look.  The doors could either be sanded to round off the fronts, or be flat mdf with epoxy putty added on top and sanded back.  The front section with the legs is more complex, it might still be cut from mdf with putty added on top for all the rounding, or it could be mostly putty over some wire to give it strength.

There are many cylindrical objects that could do the stovepipe, maybe pvc tube, or aluminium tube, or even wooden dowel.  Depends on the diameter you need.

The raised lettering cast into the centre door is a really tricky part.  I've managed a suggestion of lettering on a cover for a cast iron pipe joiner thingy by writing in PVA glue with a toothpick, but it's not that easy to get much of a buildup without it spreading and blobbing together. I didn't need to be able to read it, and put rust paint on afterwards so that disguised the lack of precision in the letters.  You would have to do several thin coats, letting each one dry, to build it up.  Cutting the letters in card in that tiny scale would probably be too hard.  Maybe a very hard plasticine would be best to carve the letters, like Chavant NSP Hard.  Then a silicone mould, and a resin cast.

Oh, just had an idea!  I made some sections of armour from heavy foil once, it could be rubbed with a rounded tipped stick to stretch a curve into it, and pressing with a ballpoint pen from the back could raise some ridges and rivet bumps.  You lay it on some thick card, something with some give in it but not too soft, and work from the back.  Possibly you could do the lettering like that, from the back, with a ballpoint.  I just peeled some foil like that off the top of a new can of chocolate drink powder.  Well, it's a cardboard cylinder with a metal rim top and bottom, and when you first get it, it is sealed with this heavy foil stuff.  So after you get the bulgy shape and the lettering, you pour some epoxy resin (or 5 minute epoxy glue) into the back to fill it and support it. Then you stick that foil covered bit of hard resin onto a piece of mdf and you have your door.

Ok, I had to do a quick test on that idea with the foil. Here's what it looked like.  Certainly better than my blobs of pva if you wanted to actually be able to read it.  Needs a coat of matt black paint over it to see how it would come up on a cast iron stove, but I think it is promising.  With a little more care it could come up looking good.

In the olden days I could have gone to a typesetter and had the word cast in linotype, then tapped it on the back of the foil with a hammer, and got something more polished. Or had a plate made if it was more pictorial - but I doubt that letterpress printing is being done any more. 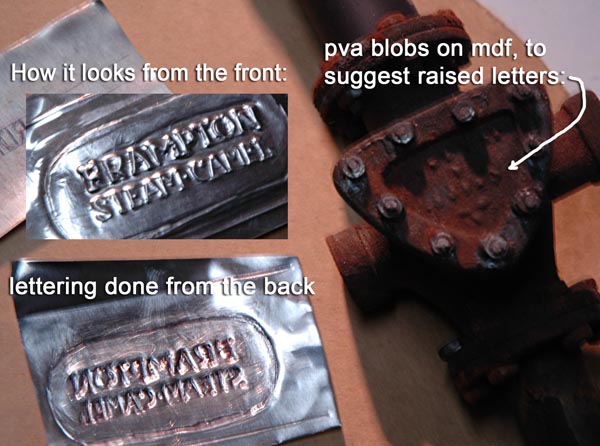 Found this miniature for sale online, described as 6" wide x 6" high by 3 1/2" deep. I think that would make the stovetop about 4" high, since it includes the stovepipe. In USA, price $32, plus shipping. There are many more on eBay USA.  Need to search ebay UK as well.  If they are 1:12 dollhouse scale they will be too small, but if they are one-off toys to no particular scale, one might work out, and save a lot of making time.

Checked ebay UK, all the listings are from the US where these Crescent mini sample stove4s seem to be common.  Although the prices aren't bad, the shipping outside the US can be a killer - I'm seeing shipping to Australia, to UK might be similar.  One photo shows a hand so you get an idea of the size.  I searched in Antiques and Collectibles for "Toy cast iron stove".

Thank you so much guys!! That's incredibly helpful :D Your models look amazing.

Yup this is for Monsterous Murders, we have a whole little cottage to build and furnish. Dennis, some more photos would be great. With the t-shirt fabric, are you able to see the texture of the fabric close up? It would be quite nice to get the same sort of velvety texture fabric in the reference photo, but then that would be too thick to go around curves.

Wow that's amazing how many stoves there are available to buy on ebay, quite a range! ;) I think we'd rather make one and try out what you suggested, it will take more time but we'll learn a lot through doing it :D

Looking forward to trying this all out and showing you the results! :) 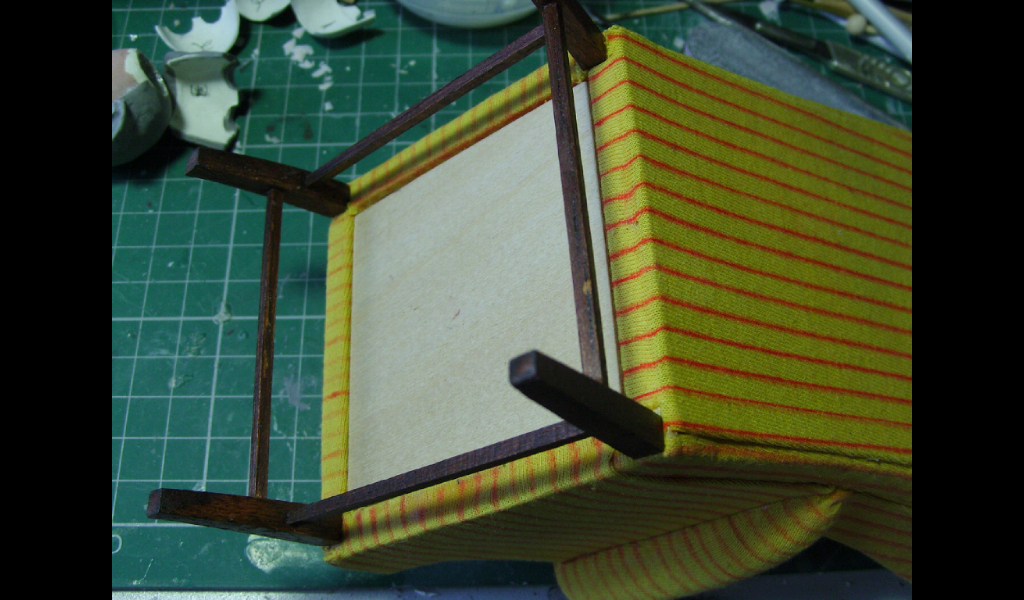 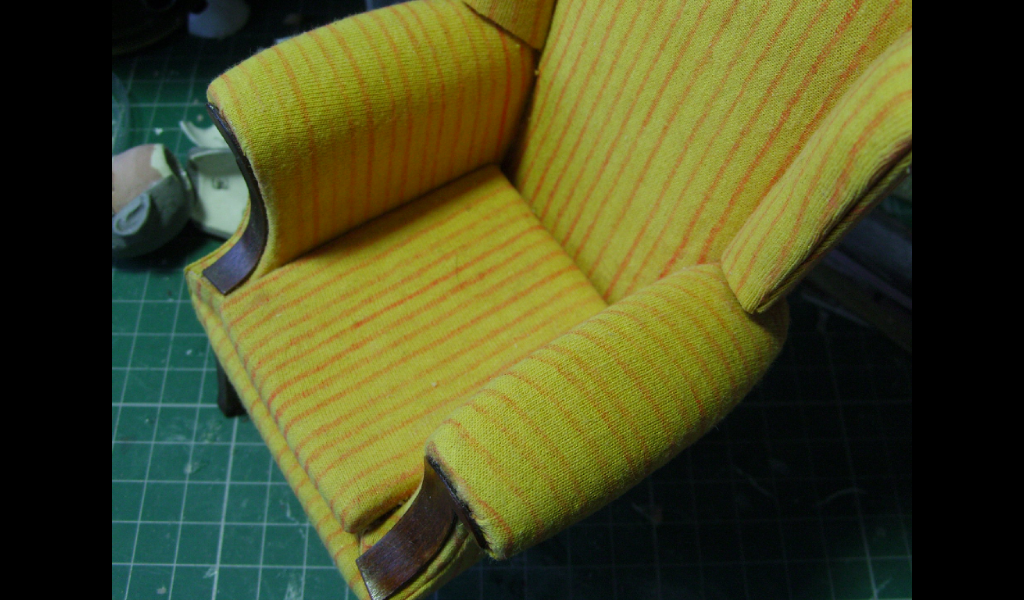 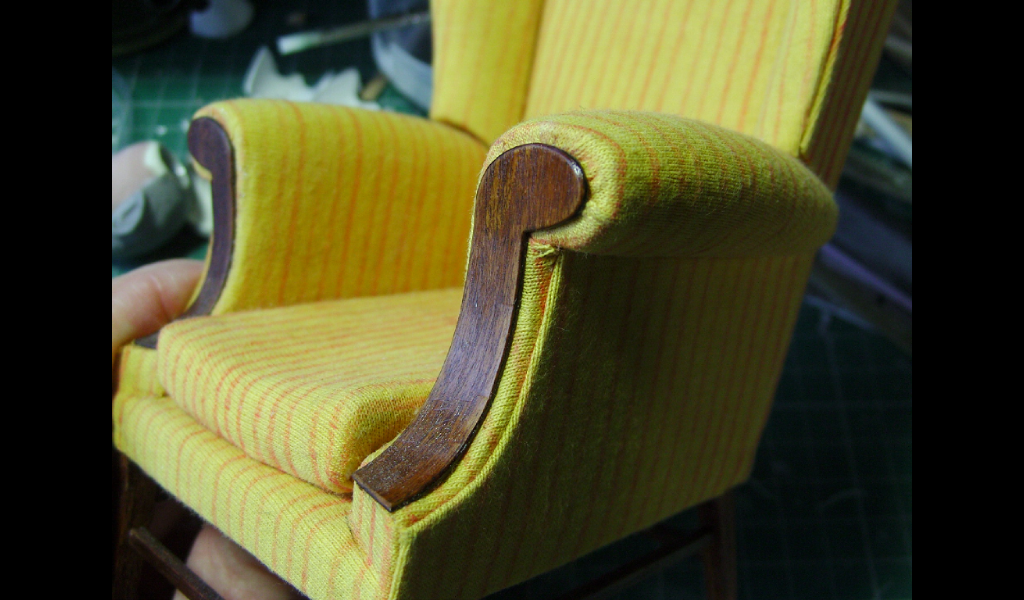 Pleased you like the chair(s). The shirt was a good quality cotton one from M&S. Only a £ in a charity shop. The weave is visible in extreme close-ups.  I carved the balsa cushion out a bit to give the impression of wear. The measurements I took from the actual chair are (in inches) are 47 high (without the legs) by 28 width by 29 depth. 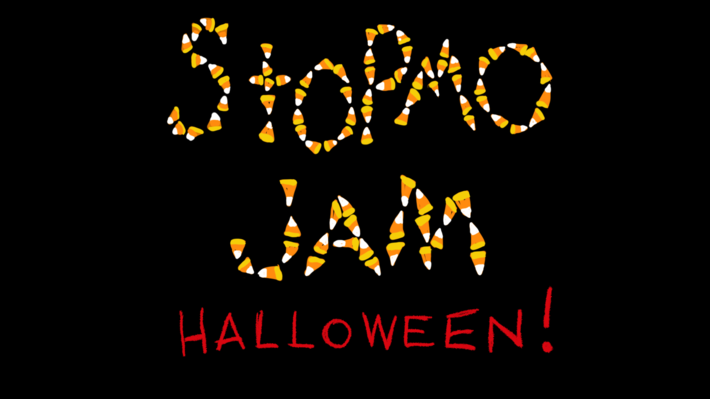