I'm doing some research on Pigments and silicone. I think I plan on using dragonskin for stop motion puppets at the shore at a10. What Pigments can I use for the dragonskin silicone? Also, if I can use Silc Pigments from smooth on,what else silicone can I use at shore A10?

You can use the Silc-Pig pigments in either the Dragonskin or the Platsil Gel-10 from Polytek.  That is another Shore 10 A hardness silicone for puppet making.)  I first used the Silc-Pig in Platsil Gel-10, then later used it in Smooth-On's Ecoflex 00-30.

I bought a small jar of each of the primary colours - red, yellow, blue - and also black and white.  But you can also get flesh colour.  I just mix my own.  The red is very strong, I could have done with 1/10th as much, but that was the smallest size they sold.

Permalink Reply by Bobby on June 6, 2016 at 6:49pm
Sounds reasonable, what about the deadener for platsil gel 10?

Yes, you could put it in the Smooth-On silicones.  Also they make their own version.   I've even mixed Platsil Gel-10 and Smooth-On ecoflex when I didn't have enough of either one on its own to fill the mould.

But I tried the deadener and didn't find it that useful.  It didn't make the Gel-10 much softer, or even much runnier so I could pour into the mould more easily.  It could only be used to pour inside, not mixed into the silicone skin you paint on the mould, because it makes the silicon stay a bit tacky on the surface, forever.  By switching to the Ecoflex 00-30, I got a much softer silicone without any of the tackiness.  So I don't personally recommend the deadener.

I now have some Platsil Gel-0 which is a softer silicone than the 10, which I will use for my next puppet.   But I haven't tried it yet.

The Platsil gel 10 is more viscous than the gel 25, although softer when cured, and the Gel 00 is even more so. It's a pity, as it makes it much harder to fill a mould. I just use deadener to ensure the silicone is runny enough to get into the mould. The tackiness is an issue.

Apparently the Tinsil is softer than the Platsil, but beware of problems with platinum silicones not going off. They are not interchangeable with tin-based ones. Have a look at the StopMotion Magazine You tube videos for some good stuff on using Tinsil for puppets.

Thanks Simon, that's useful info about the Platsil Gel-00 I bought but haven't used yet.  It sounds like it will be ideal for painting the surface skin, but difficult to pour down the thin neck-holes.  The Gel-10 was hard enough, when pouring the stream would fold over itself (Never cross the streams!) and form a seal, trapping air below it, and just sit there.  I had to do a lot of poking with a stick to get it to go down.  I should probably get some more of the Ecoflex 00-30 for filling the mould, it pours well.  Only trouble is I have to order that from another city and pay shipping, there is no Smooth-On distributor here in Melbourne, unlike the Platsil.

I haven't found any tin cure silicones sold in my country that are soft enough for puppet making, so I've had to stick with the platinum ones.  I knew they had to exist when I read about how they cast puppets in foam latex, trimmed it back, then put it back in the mould and cast silicone over that.  (Was that in Corpse Bride?)  Platinum silicone will not cure if it comes into contact with latex, or even a mould that has previously been used to cast latex, so they could not have used platsil.  There is such a thing in the US, and a brand in the UK, but I was not able to buy it here.

I would not count on any pigments or other additives made for platinum silicone working with tin silicone.  If I had the stuff already I would make up small samples to test it. The pigment might be ok.  And vice versa, I would not use anything made for adding to tin silicone with the platinum stuff without testing first.

Not sure the Platsil Gel 00 is even good for painting the surface skin as it is so viscous. I was quite disappointed, and reverted to Gel 10 for a full-size Frankenstein piece (sort of bathing cap for the actor!) I used lots of retarder to allow the silicone to have time to settle, and a plunger in a tube to force it into the mould. I don't think Gel 00 would have worked, so it went back into the pot. Should be OK when filling a 2-part mould and squeezing it out. Then one would use Gel 10 as the skin surface.

has a great step-by-step guide to using Tinsil Gel (presumably 10, he doesn't say). At 8:30 he starts discussing the silicone and reasons for choosing it. It makes me wonder whether Tinsil is altogether a better way to go: long working time, no incompatibility problems, seems to be soft enough for puppets. John in the video also advocates not wrapping the armature. Just seems to need a de-gassing chamber - impossible with Platsil because of short working times. He also mentions the technique of casting in foam latex then trimming back and giving it a skin of Tinsil.

Hmm, gotta try this stuff. Any comments from experience?

All the silicones I've tried, however thick they are and seem to cling to the sides of the mould, will slowly flow down and pool in the low spots.  No matter how many times I brush it back up, it will flow back down, so I have to apply a very thin layer at a time.  So I can see how the viscosity of the 00 might make it harder to apply, yet still sag down.  But since I have some Platsil Gel-00, I'll have to find a use for it. ( I actually thought I was buying Gel-10, didn't read the label properly until I got home.)

It would work to fill the face, before putting on the back half of the mould, with my method of casting silicone heads.  That is a nice big open area to pour the stuff in, so the viscosity should not matter.   Once I put the back on I have to pour down a very narrow neck, with the neck wire and some foam on it getting in the way as well, and the Ecoflex works far better for that.  When I cast full bodies, without head, I pour through the neck then as well.  John Ikuma's method of filling each half of the mould with it open, then slapping it together, might be better if using a thick silicone.

Permalink Reply by Bobby on June 9, 2016 at 5:07am
I understand now. How about mold making? Instead of plaster, how about poylmer clay?

For the mould, you need a material that can go on as a liquid, even if it is a very thick liquid, so it can flow into the hollows and pick up all the details.  Then it needs to set - either to a hard solid, or to a rubbery consistency.

For a couple of silicone bodies, I made the mould from fibreglass, with polyester resin, instead of plaster.  (Could have used epoxy resin, which is less stinky but costs a bit more, but I had some polyester resin I wanted to use up.)  In one case, it was so I could send the mould to the customer in America who had ordered the puppet.  He wanted to cast additional bodies, with different heads.  Plaster is big, heavy, and breakable, and costs a lot to send from Australia to the US.  (Especially for a mould of a big fat Sumo wrestler!)  Fibreglass can be much thinner and lighter than plaster, but still strong.   It worked, except there was a tendency for the fibreglass to bow out slightly as it cured. Maybe a 2mm gap around the middle of the torso, but touching further out from the centre like at the hand and feet.   I had to put clamps in the middle to squeeze the centre together.  That fixed it, and I got a good cast in each case.  Like plaster, the resin goes on as a liquid, then sets hard without having to bake it.

Here is the polyester resin mould of the Sumo wrestler, with silicone skin painted in.  You can see on the edges that it is quite thin compared to a plaster mould.   The head mould for the same character was plaster, you can just see a bit of it on the bottom right edge of frame, where I have painted black silicone into the hair area, and am waiting for that to set before I paint the flesh tone silicone into the rest of it. 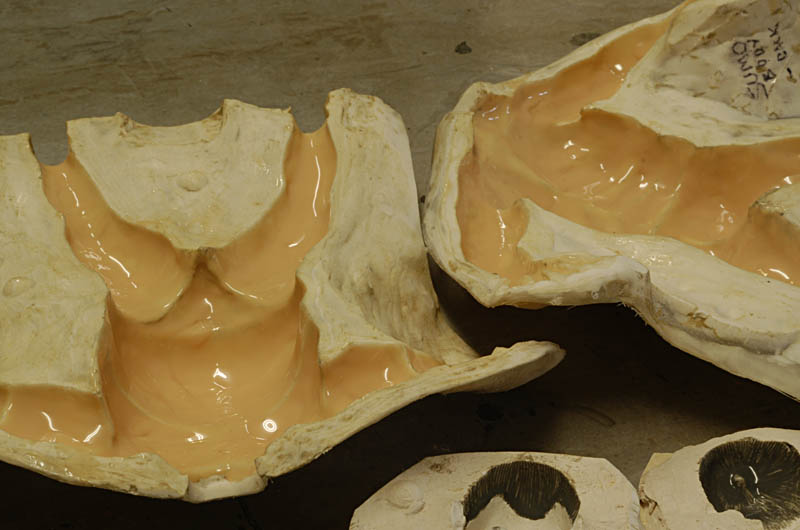 Also a pic of pouring the silicone in through the neck hole.  That is Ecoflex 00-30 being poured in. 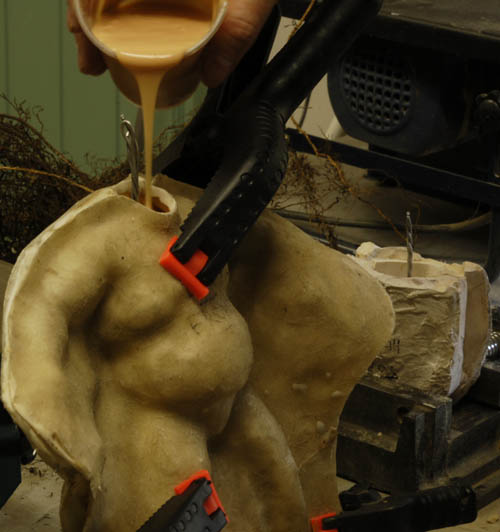 STOPMO JAM 3
This time, the theme is HALLOWEEN. All entries must be submitted by September 18, 2021. More info here.