I have a perforated galvanized steel sheet animation stage and my puppet works well with screw tie downs but I want to use magnets because I'm planning on covering the steel with canvas so that I can paint it so that it resembles flooring inside an apartment and I don't want to have to keep drilling into the canvas and repairing it and I thought it would be quicker using magnets. These are the magnets I ordered and that arrived today: https://www.ebay.com/itm/2-Powerful-Grade-N42-1x1-Inch-Rare-Earth-N...

I tried the magnets out and they seemed way too powerful. I then wrapped some gaffers tape around them and that helped take some of the strength away. However, they still seemed hard to work with because I was struggling with the magnets forces. Using the magnets seemed awkward compared to the screw tie downs. Is there a way to prepare the magnets so that they are more directional and just attract the feet of the puppet and the steel sheet. What are the standard practices when using magnets as tie downs? Is there a particular magnet and strength of the magnet I should be looking for? I'm thinking about ordering a couple of these because they seem like they may work better with the aluminum housing surrounding the magnet but they are a bit expensive: https://www.animationsupplies.net/professional-magnetic-tie-down-sy... 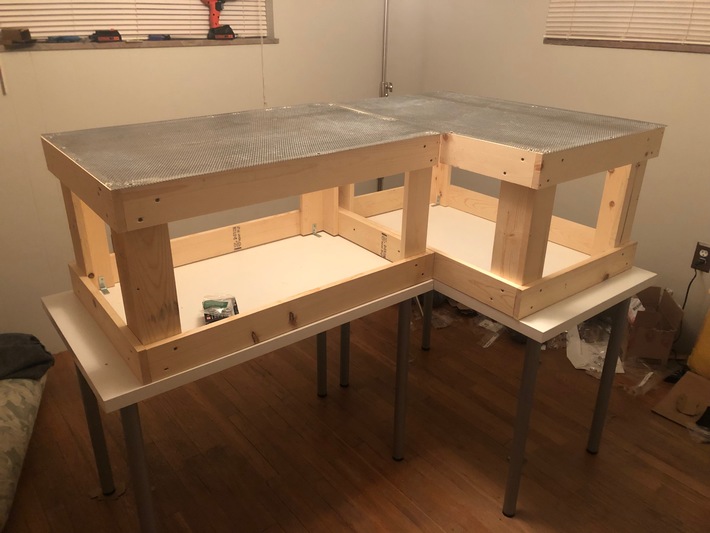 When I visited Cosgrove Hall studios (in Manchester, UK), they used cylinder magnets about C or D battery size, with a threaded hole up the middle. Magnet strength drops off with distance, so what they did was put a screw up the middle.  To remove the magnet from under the puppet, they would turn the screw from below so it pushed up against the bottom of the set floor, and that pushed the magnet away.  Then it could be removed more easily, without shaking the set and flexing the steel mesh so much.   I think you do need the magnet to be very strong, to hold the weight of the puppet when it is off balance, like when walking.   I have no idea what the iron magnet would be like to drill and tap a thread into, or whether they did that or bought them with the hole already there.

But I don't use magnets, I prefer screw tie downs, so that is all second hand info.  Don't know why, but the animation supplies links are not responding at the moment so I can't check them out.

'Very powerful' would be an understatement if you are using a 1"x1" neodymium magnet. Depending on the weight of your final puppet you could start with 6x3mm and go up from there if it doesn't hold well enough. I think you can get 100 of them (the 6x3mm) for about 12 dollars. Even if they aren't big enough for what you need, and you have to get the next larger size, I think you will find many uses for them so they won't go to waste.

Be careful though if you have them around small children because they can be dangerous if they are swallowed.

Thanks. I'll look into those suggestions.

Can I break into this old-ish thread and ask about these techniques. I have to admit I have NEVER done walking! My characters are sliding around, or just sat there, or have long dresses...
So the idea is that if you have one of these metal perforated table tops, you put magnets in the feet? But surely, most magnets however strong will "snap" the foot down before you want it... or do you have to  laboriously remove it as the foot rises (meaning lots of onion skinning re-positioning) Is that really what folk do?

And screw tie downs, are folk really drilling holes all over the place?
Im asking, not to critisise, but to evaluate how to do my thing. Typically IM working much smaller than most people, my characters are at most 10cm, but normally less, so actually touching them too much is dangerous.
What techniques could I use to achieve a walk, and keep my character from falling (Im expecting to have to use rigs and remove them in After Effects...

A magnet in the foot will snap it down to the metal floor.  So you put a metal plate in the foot, and place the magnet under the set.  You don't put the magnet there until the foot is touching down.

I use a version of screw tiedowns, the T-and-slot method.  Not as popular as threads. (The head of the bolt is filed down to make a T shape, which pushes up into  slot in the aluminium foot block of the puppet, then turns sideways and is tightened down.  Quicker and easier to animate than getting a bolt lined up with the threads in the foot, but you do need bigger holes in the floor.)

I have used  perforated metal sheet with tiedowns a couple of times, so all the holes are already there, but mostly I use a sheet of 12mm (1/2") particle board.  Usually I drill a row of holes where the puppet is going to walk.  As I re-use the particle board floor, it gets more holes in it, which I fill with a blob of plasticine if they show.  But for outdoor scenes with rough ground, they don't show up that much.

For one set (a pub interior), I had a pattern painted all over like a carpet pattern, and I could put a grid of holes everywhere, hidden in the dark spots.  All the holes I needed, pre-drilled.

Your puppets are small.  I have done a few that are  125-150mm tall, but most are 250-300mm tall.  The exceptions are mini-puppets, only 75mm, which are smaller scale stand-ins for bigger puppets.  For them, I mostly put a very small wood screw down through the foot from above, into the set , as needed.  A blob of plasticine hides the screw head.  Only rarely do they walk a lot, more often they take one or two steps just to give continuity of action from a shot of the bigger scale set.  Like, a wide shot of the 1:24 set, mini puppet has left foot screwed down and takes a step with the right foot.  As the foot is about to land, I cut to the 1:6 scale set and the 12" puppet puts his right foot down and takes a few more steps.  So the mini puppets are not intended to carry the performance on their own.

You need a rig for a run, where both feet will be off the ground at the same time, but it still helps to have something to hold the foot that is supposed to be carrying the weight, otherwise it can skate.  I prefer o rely on the tiedowns for every frame except where the puppet is airborne, but you could have something small like a pin or a blob of blue-tack just to stop the foot from sliding, and rely on the rig for most of it.  Rig removal isn't hard, but you also have to look out for shadows. I had a raven flying around a room, with the raven's shadow in one frame going where the rig was in another, and the rig's shadow everywhere as well, and it took a heap of work to clean it all up.