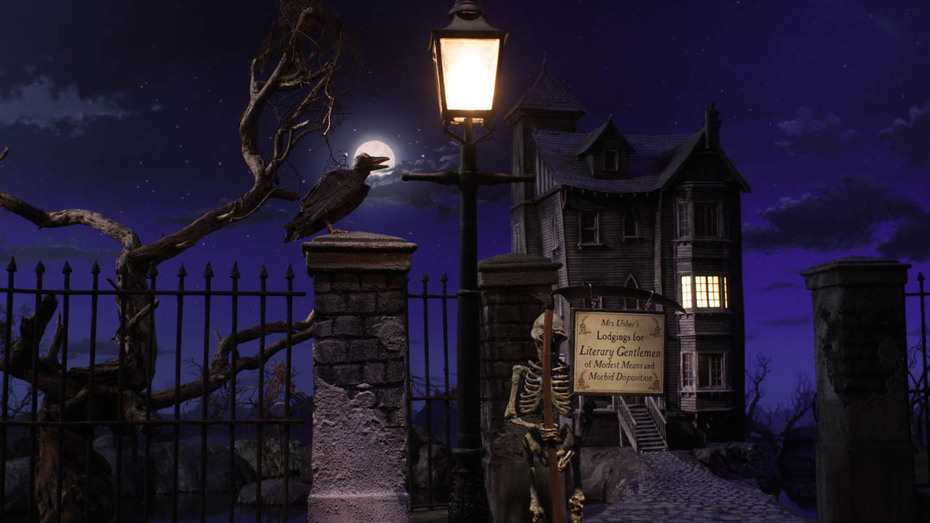 Exterior of the boarding house where Poe is trying to write a poem. The bay window with the light on is his study, and the bext shot will cut to there. As this shot tracks in towards the house, the raven does a caw just as the moon passes behind his head. There is a warm white compact fluoro inside the house. I used a 20 watt halogen globe in the street lamp that has to be switched on for each frame and immediately switched off once the camera gets the shot, so it doesn't melt the plastic "glass". I tried LEDs but they were either too blue, or too dim.
The raven wings just barely manage to fold up enough, and are still a bit big and bulky. I don't know if I can animate folding them on camera, when it lands on the bust, it was hard to do. Possibly a folded-wings version and a flying version would have been a better way to go.

Perfect! You've really put some time in that one.  I need something like that blue sky effect for my cemetery scene.

Lots of siding and window frames on that house, but knowing you, Nick, you probably knocked that thing out in a week!

. It would probably take me 2 months just to make the stair steps

. I love the sky, with the grey clouds, is that a painting? Your lighting is very nice, but the front yard doesn't seem that deep, to nit-pick. Could be the camera angle, but that's not it, is it? Could be less DOF, but then that would destroy all that hard earned detailing on the house, huh? I would suggest, if I may be so bold (and bold I am) to suggest some atmospheric perspective, in the way of fog between the fence and house, it would also deepen the mood for this house of " Literary Gentlemen of Modest Means and Morbid Disposition". I reckon that you are way ahead of me, and this is simply a test shot, and you already have this in mind, so I 'll pull the foot out of my mouth now.

I'm sure that you are also aware that it's possible that you get flicker out of that halogen light post, and that the best way to try to avoid it will be be warm up the light a little first, and then try to keep the timing the same for each frame ( turn it on, wait for a set number of seconds, then click.) It may be unnecessary, let me get that other foot out now...

Thanks for commenting, Dennis, Buckner, and SMiller.

BoldSchooler  -   This is an actual frame from the shot - it's done, shot, finito, in the can!  So I'm afraid the faults you see (and I see them too) are here to stay.

Yes, the sky is a painting.  It's water based wall paint on canvas, stapled onto a paint frame made from pine framing and covered in 3mm plywood panels.

The distance between the gate and house is not that great, you're right.  It's forced perspective, with the gate (recycled and remodelled from another film) being 1:6 scale, and the house a quarter of that size at 1:24.  I needed to try to fit the tall house in, but have the sign fairly large in the foreground.  It all fits on a 2400 x 1200 piece of particle board.  I suppose there is only about 300mm between the steps and the gate.

I don't usually get flicker from halogen lights, but there was a little bit from this one, because after switching it on I had to check the raven's move - without the light on it looked different - and sometimes I made an adjustment.  And if there was no animation, just pressing a button to move the track along at full speed, I could get away with leaving the light on for 2 frames before it got too hot.  So the warm-up time did vary, you're absolutely right about that!  But I don't mind at all, it's supposed to be a gaslight, and it's subtle.  I considered playing with the  dimmer switch In this case to add more flicker, but decided it would be too much, and distracting.  For the same reason, I decided not to put the hansom cab going past in the foreground, it would draw the eye and seem to be important to the story, which it isn't.  It would only be there to add some period dressing.  And it's supposed to be near midnight so you wouldn't get much traffic.  (Over a month spent making cab, and unfinished horse, too...)  Instead I get to introduce the birdie a bit early, which is more relevant.

I would love to have added some atmosphere, but that would get tricky as that would require compositing, and this is a tracking shot.  Once the camera is moving at full speed it could be reproduced, but the 48 frames of ramp-up at the start, and about 24 frames easing off at the end, are done by hand and would never be the same twice. If it were a static shot I could have shot the elements separately and added a haze to the background bits.  I will be doing that in another film, where the hansom cab is actually needed, since it's a foggy London scene.  And these gates will get recycled again as cemetery gates for that one.  I'll add some angels to the top of the square posts maybe.

Making the house - a week?  I wish.  It took several weeks.  And I didn't have to make every plank of the weatherboarding, I vac-formed sheets of it from a single section made with overlapping card strips.  Window frames did take a lot of time!  I suppose the steps were about 6 hours actual work, but done over 2 days.  The original gates, simpler and more modern (for a public swimming pool complex), took over a week, and there was a couple of days or 3 modifying them.  I found some tiny gumnuts (seeds from eucalyptus tree) that I used for the spikes on top, after looking everywhere for spearpoint/fleur-de-lis finial shapes in the right size.  If I had sculpted one and cast dozens of copies that would looked better, but would also have added another week of making for small things only seen at night.

Just setting up and futzing about with the lights and camera angles took a week.    Now I need to set up for the first interior shot that follows this, fortunately one without dialog because I haven't written it yet, let alone got voice recordings.

Really interesting getting some insight on how you prepare and film a shot like this. It's all those 'little things' that eat up the time it seems.

Nick, You mean that you didn't build that house in a week? You SLACKER!

You know I'm kidding, it's just my way of expressing how prolific you are.

Awesome painting, how did you get the moon to show up so brightly? Must be that 'special formula' house paint you were using

Good call on the hansom cab. It really shows your discipline to make such a tough realization. So mature...

Any chance of Peter working some of his post production magic on that atmospheric perspective? It would be a toughie at this point, I know, but he has "strange, strange powers!"  "Golar is not afraid to add fog into a shot with no independent layers, that the wizard forbid!"  "Thaayts riiight!" Well , you can cross that bridge later, or just go around. "Why did the chicken cross the road?" "Because it was too far to go around." Seriously, it looks killer the way it is, you know it, I know it, anyone that sees it knows it. I heard that in Japan, they call you "The Australian". That's "THE."

You rock. Even if you are a "Pohmmy bastard!"

Comment by StopmoNick on July 20, 2013 at 4:33am
The moon has it's own spotlight, lighting it and a soft glow around it. I have one Selecon 50 watt 12 v halogen that can be focussed, and has a slot to put gobos in. I used a piece of metal with a round hole drilled in the middle, and put it slightly out of focus.
I could have put a bit more soft light on the house so it was less dark and contrasty than the foreground, I guess... But it is near midnight so I didn't want to make it too bright. What would have been fun is the old Universal Pictures/ Wolfman type ground fog, but that requires dry ice and shooting live in real time, or even high speed.

Awrooooooooohh!!  Creepy stuff here, mate.  I was wondering how the Poe Project was Poegressing, and Popped in to Peep at the Proof, and find this.  Glad, as always, that I did.  You are a never-ending source of delight and wonder, Nick.  Thank you for sharing.

StopmoNick replied to madrobot's discussion What image size do you import from camera?
"Correction - I export from AE at 3840 wide x 2560, because it is still a 3x2 ratio.  I crop to…"
12 hours ago

StopmoNick replied to madrobot's discussion What image size do you import from camera?
"I normally set the image size in the camera to Large, the full size, which would be the native…"
12 hours ago

What image size do you import from camera?

Hi All. I am looking at getting a PC built for shooting stop motion and am trying to work out some…See More
yesterday
2 Comments 0 Likes

StopmoNick replied to StopmoNick's discussion Harryhausen 100 tribute
"Thank you, Santino! I did Ray's head sculpt first, because I wasn't sure how I would go.…"
yesterday