(view latest updates in Comments below)

Developing a promotional spot for Gumby.com

In 2013, I began work on a promotional spot for Gumby.com.  Joe Clokey, the son of Gumby creator, Art Clokey, agreed to let me develop the spot so I began thinking about ideas for a short, clay-animated, old school Gumby animated adventure. I came up with several ideas, drew out the storyboards on my iPad, put them all together in Adobe Premiere and created an animatic. I tackled the last shot, Shot 10 first. It took months to set up, test and shoot. Post work, mostly rod removal was completed recently. Ultimately, it was decided that this one shot was all that was needed to promote the Gumby website. It was included on the recently released 50s Gumby Show DVD. Here is a video showing the several stages of the spot.

Here are the storyboards from the Original spot as it was intended:

Shot 10 starts with a clay ball entering frame (supported by a flying rig from above) which then hits the ground and bounces to a stop.  It then begins to morph into several random green characters fairly quickly as the camera slowly pushes in (on the manual camera rig requiring manual track, tilt and focus)  The final morph ends with a whirling tornado. (supported by an overhead rig which allows me to spin it slightly during exposure to create blur) The camera jumps back quickly a bit as the tornado spins faster and begins to pull the blocks toward it.  The blocks pick up speed and begin to orbit the tornado (blocks supported by magnetic wire rigs and/or an overhead rig which is part of the tornado rig)  Once the tornado reaches its full speed, it begins to move toward the camera (on a winder rig overhead also requiring manual focus as the tornado approaches) The blocks, some spinning, some stacking up in the foreground, eventually form the Wall of Blocks as Gumby spins out of the tornado.  The blocks spell out 'Gumby.com' and feature a few of the Gumby characters and website attributes. (original idea of comping Gumby episodes onto blocks has been omitted) At the last moment, Pokey enters frame left.  And that is Shot 10!

Building and lighting the set

For Shot 10,  I needed a set big enough for a wide camera angle.  So I scrapped the white sweep setup used for the Gumby Doodle (see A Little History...) and built a large table top set with an even larger white background.  I lit it with five 5000k fluorescent lamps.  The end result looks like a white sweep, the horizon is barely noticeable. 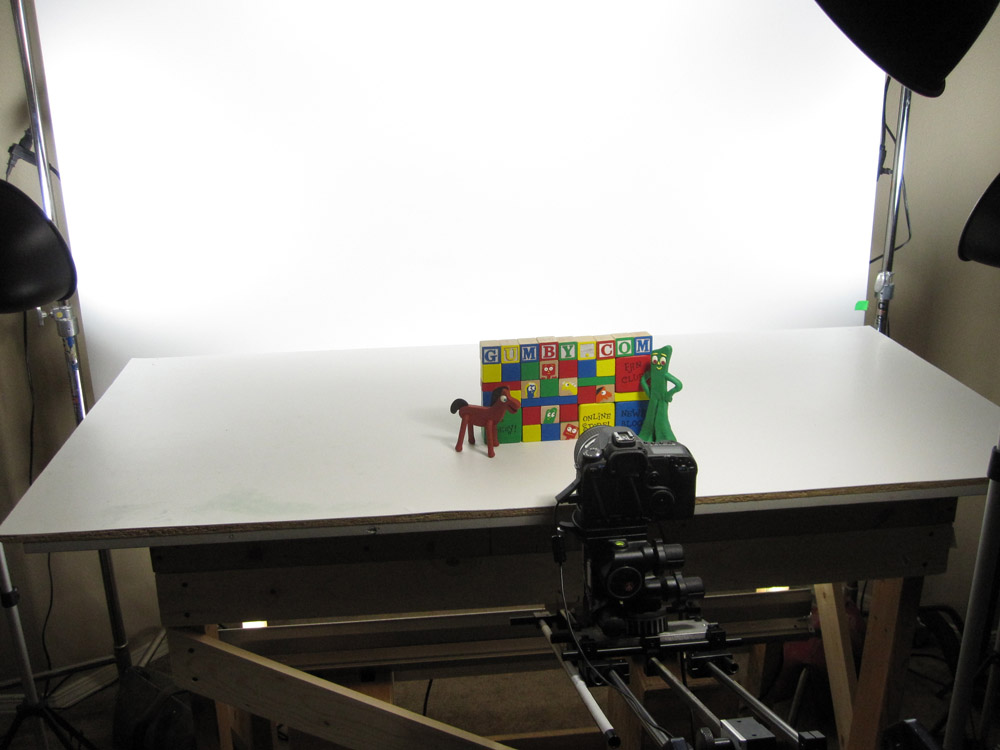 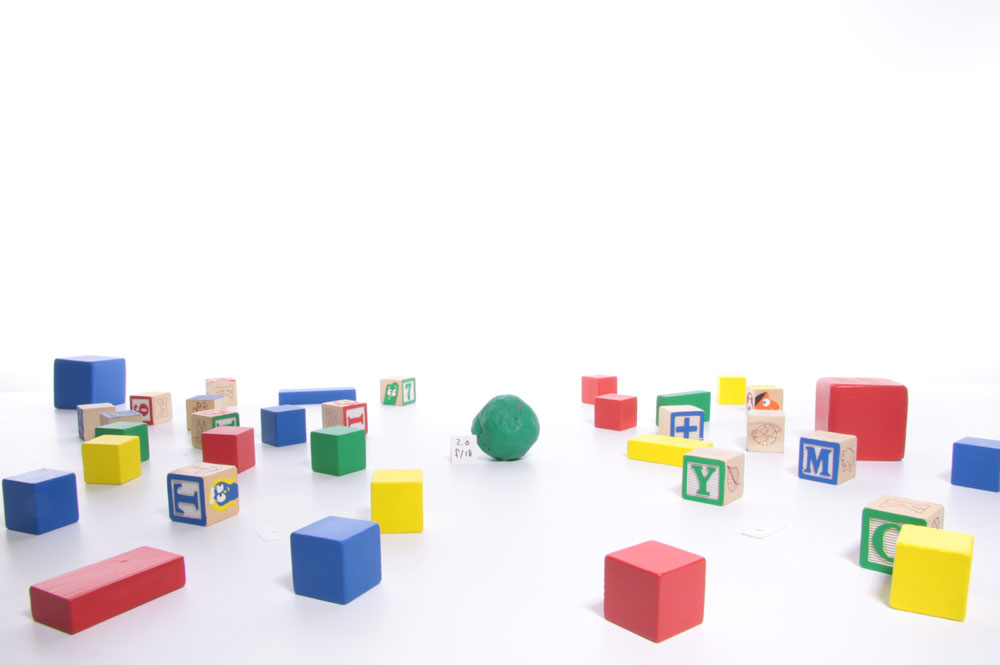 I designed, built and painted a few prop blocks that would form into the Wall of Blocks at the end of the spot. Once I had the props and camera in place, I began shooting lighting tests to find the best exposure for all camera positions during the camera move. 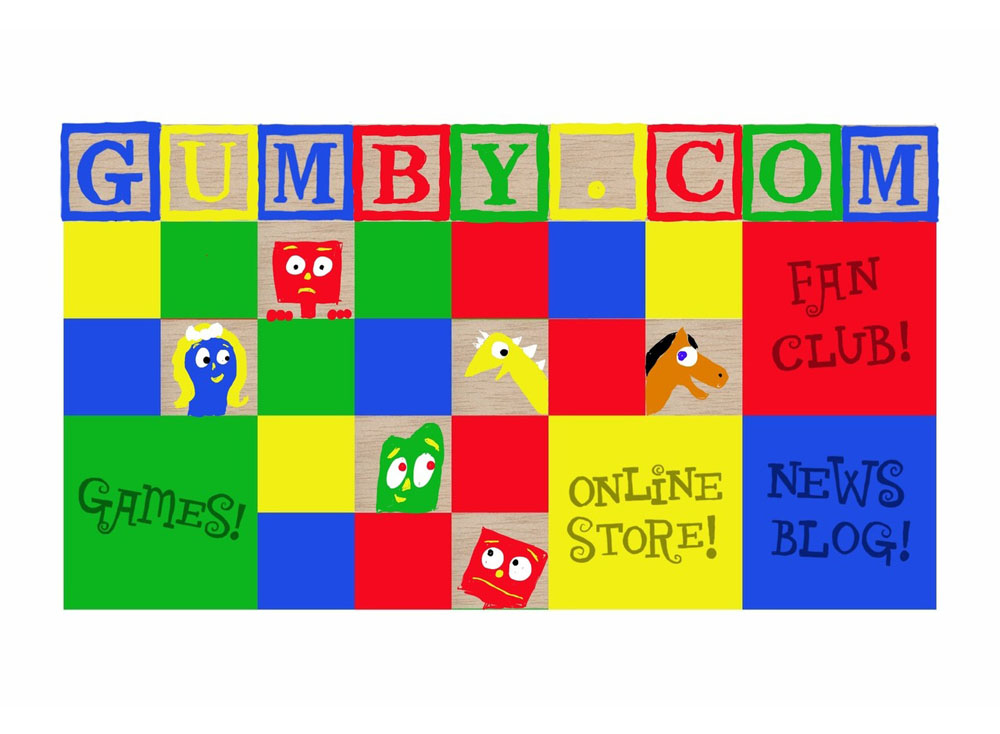 concept art for the Wall of Blocks 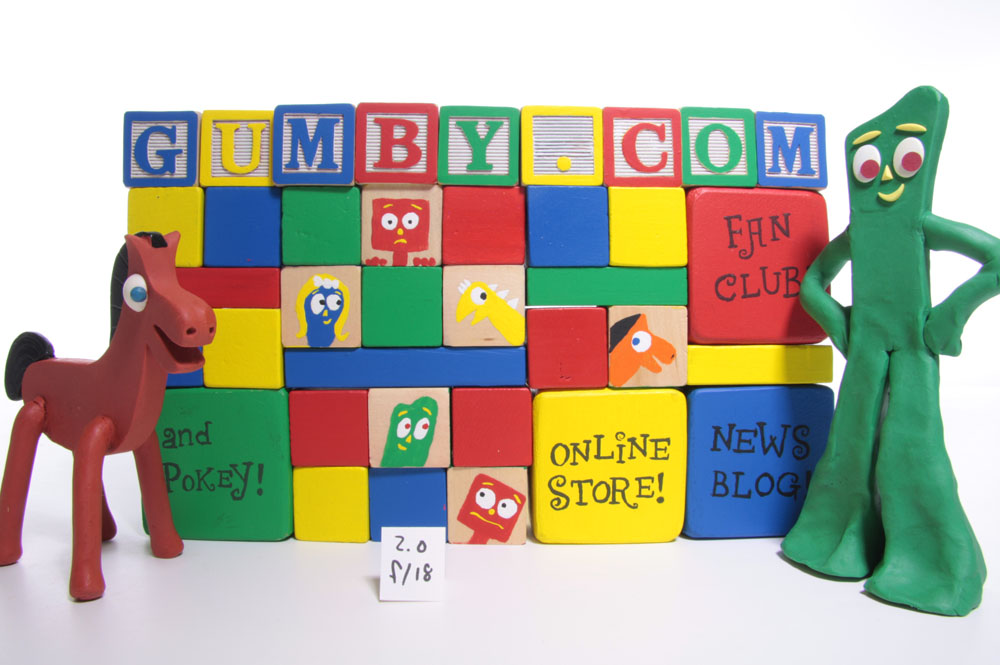 I built a few rigs: a track for the camera, an overhead rig for the tornado and several magnetic rigs used for flying individual blocks.  My rigging kit is comprised mostly of Berkey 500 series, Filmtools teenie-weenie series, a couple of custom-built geared winders.  I also tend to use magnets, foam core board and armature wire for simple rigs. The top of the set is made of thin PVC sheeting over a wooden tabletop.  Underneath the PVC sheet, I laid thin steel sheets.  I made several flying rigs out of foam core, magnets and armature wire. (see photo below) The magnetic rig grips the set, enabling easy placement of flying blocks.  I use Magcraft brand Rare Earth Magnets.  I also built a crazy overhead rig for the tornado and the flying blocks.  By spinning the rig slightly during the exposure, I get a decent motion blur.  See the tornado test below.  All of this prep was necessary before shooting the first animation test. 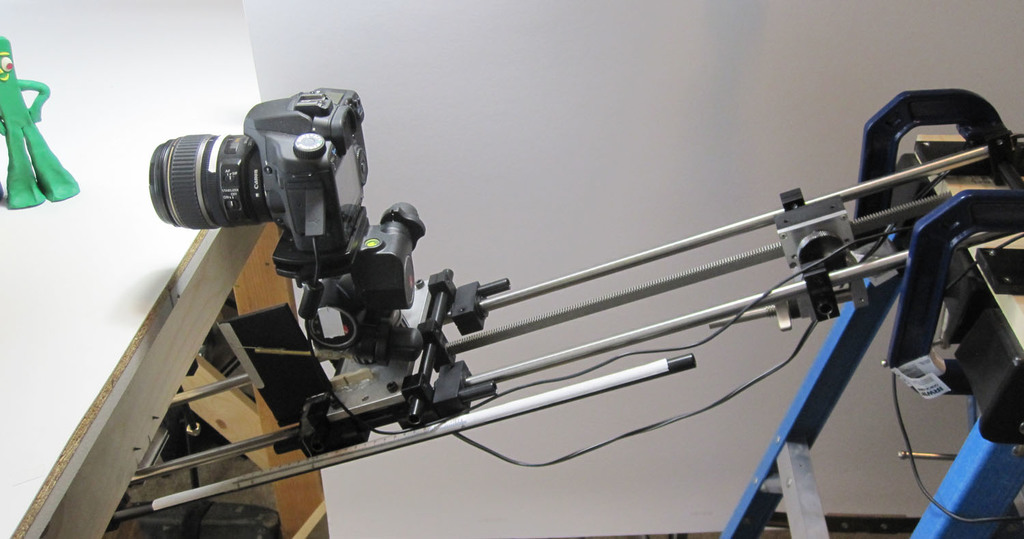 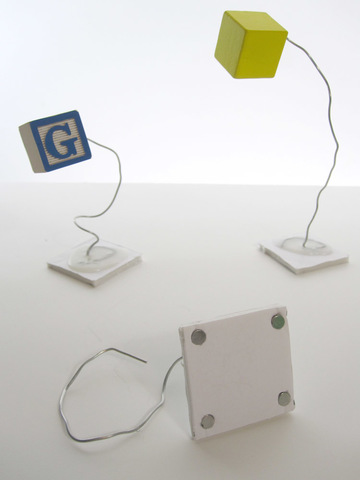 Here is the first test for Shot 10, sometimes called a Block or a Pop Thru.  Animation is very limited, including the morphing, the tornado and block animation.  The purpose of this test is to figure out the overall timings, test all the rigs, test the camera movement (which still needs some work) and make sure the lighting looks good throughout  I learned a lot from this test, such as I want to put a curve in the tornado's path to make it less linear. The flying rigs and camera rig worked well so after a few tweaks, I should be ready to shoot the real thing.

I've been shooting camera move tests today in preparation for launching this shot next week.  This video clip shows 2 tests:  The first is a 110 frame slow truck in and tilt up.  It was shot on Threes in order to rough out the move.  Since the move is so slow, the tilt increments are very fine.  After shooting a couple of uneven and pretty boring move tests prior to this, I wasn't having much luck getting an interesting move that I was happy with.  I wanted a slight swoop in feeling to it.  Finally, I decided to draw on the screen and use some tracking markers.  This worked.  The second part of this test shows the quicker pullback, about a 20 frame move on Ones, which is a much easier move to animate!  This move will happen when the tornado first appears. 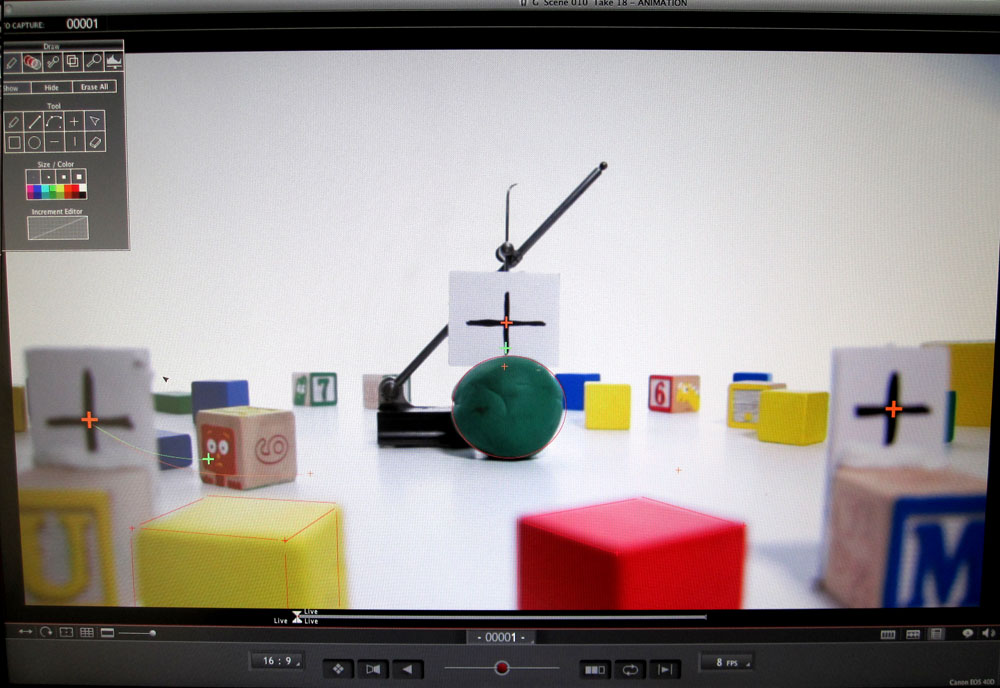 The camera is moving around a lot in Shot 10 and hitting focus and retaining composition is critical.  At the end of this shot, the blocks need to assemble in an exact position.  The table top is white, so I don't want to mark the actual set, so I built a set of foam core block guides.  (See photo below)  This is an easy way to ensure precise registration.  The brackets are glued to the set so the guides will always align in the same spot.  The large green and blue blocks fit into the guides.  The 2 guides can then be removed easily between exposures. 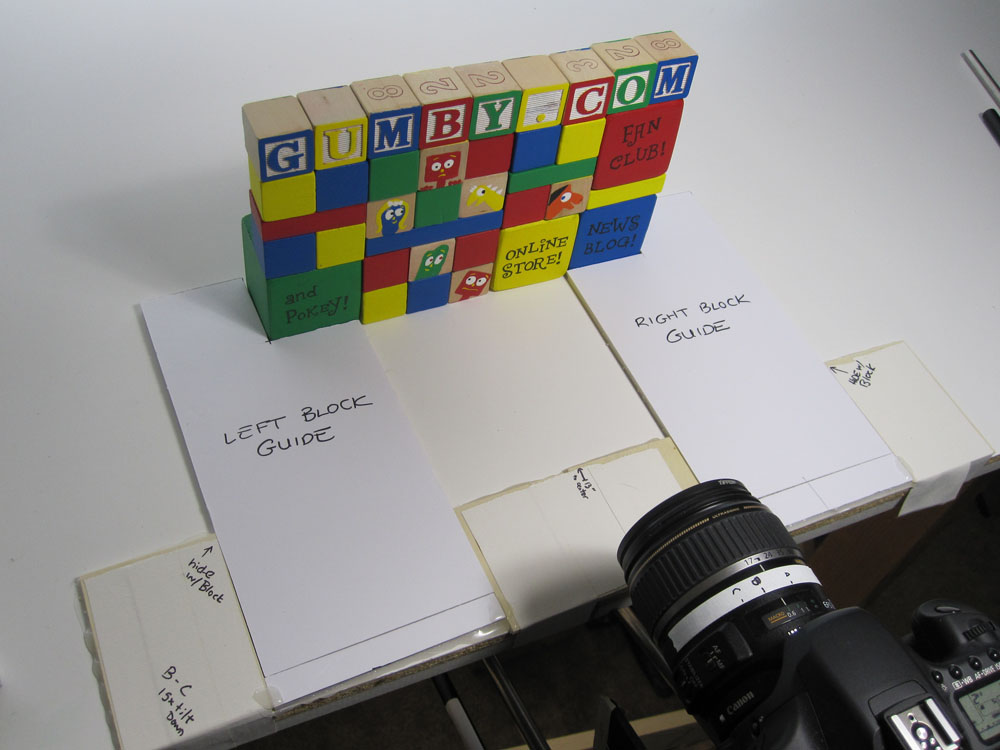 Delayed the launch due to shooting a few more camera move tests and a head cold, but finally I'm shooting.  It's about 1/3 finished, just over 200 frames shot.  I am almost to the end the manual camera move which is going well.  The morphing bit is almost finished, going slow as molasses, but I just need to shoot 2 or 3 more morphed characters before getting into the tornado section of the shot.  Here are a few photos of some of the morphed characters: 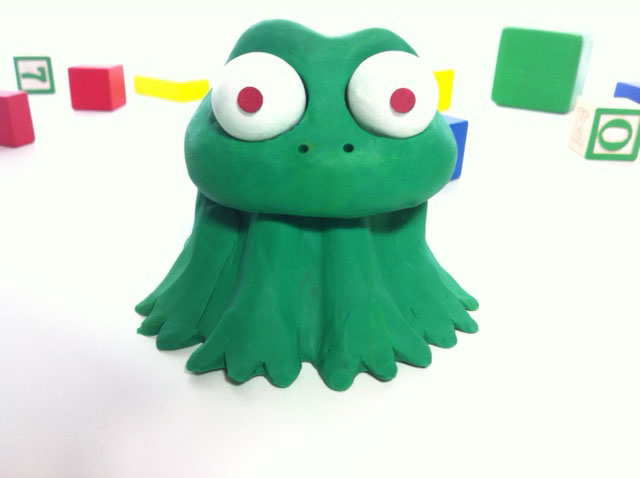 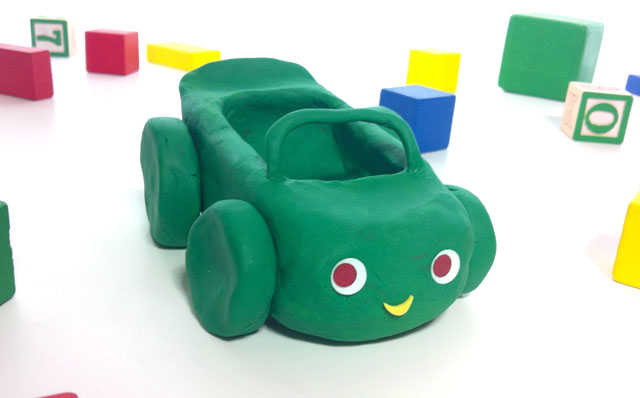 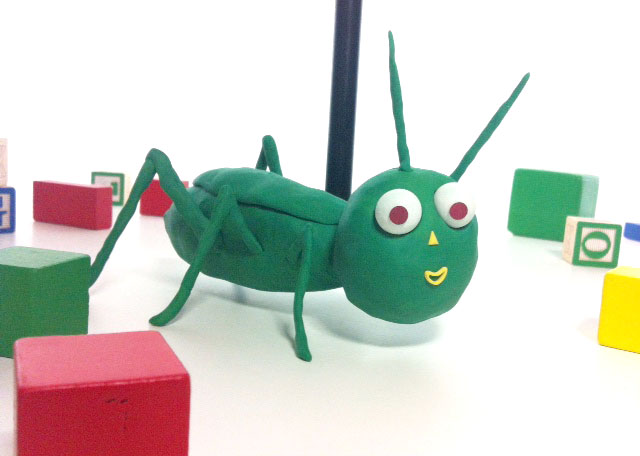 Here's a half speed video time lapse of Shot 10 in progress.  Just finished the Morphing bit.  I am about 1/3 finished at this point.  Just about to start animating the blocks spinning around the tornado for the next 240 frames.

Just a quick update.  Animation has slowed quite a bit.  Lately, it has been taking about an hour to set up and shoot each frame and clean frame.  Many rigged blocks to animate as shown in the photo below.  I anticipate it speeding up once most of the blocks are attached to the Tornado Rig.  Today, I only had about 3 hours to work, so I only got 3 frames shot! I decided to take frame 286 into Photoshop to see what I will need to deal with in Post.  All 3 frames shown below represent frame 286.  Dragonframe allows animators so shoot multiple exposures, so when needed, I've been shooting the clean plates as I shoot the animation.  It was necessary because of the constantly moving blocks; shooting a clean pass after the shot has been animated would not have worked as well.

Top left is the animation frame with all the blocks, Top right is the clean frame with most of the rigged blocks removed, and the bottom frame is the finished cleaned up Photoshopped frame.  I have many frames left to shoot in Shot 10 so this was a valuable exercise to do.  Lesson learned: I need to avoid putting rigs into any shadows or reflective areas as those are the trickiest parts to clean up. 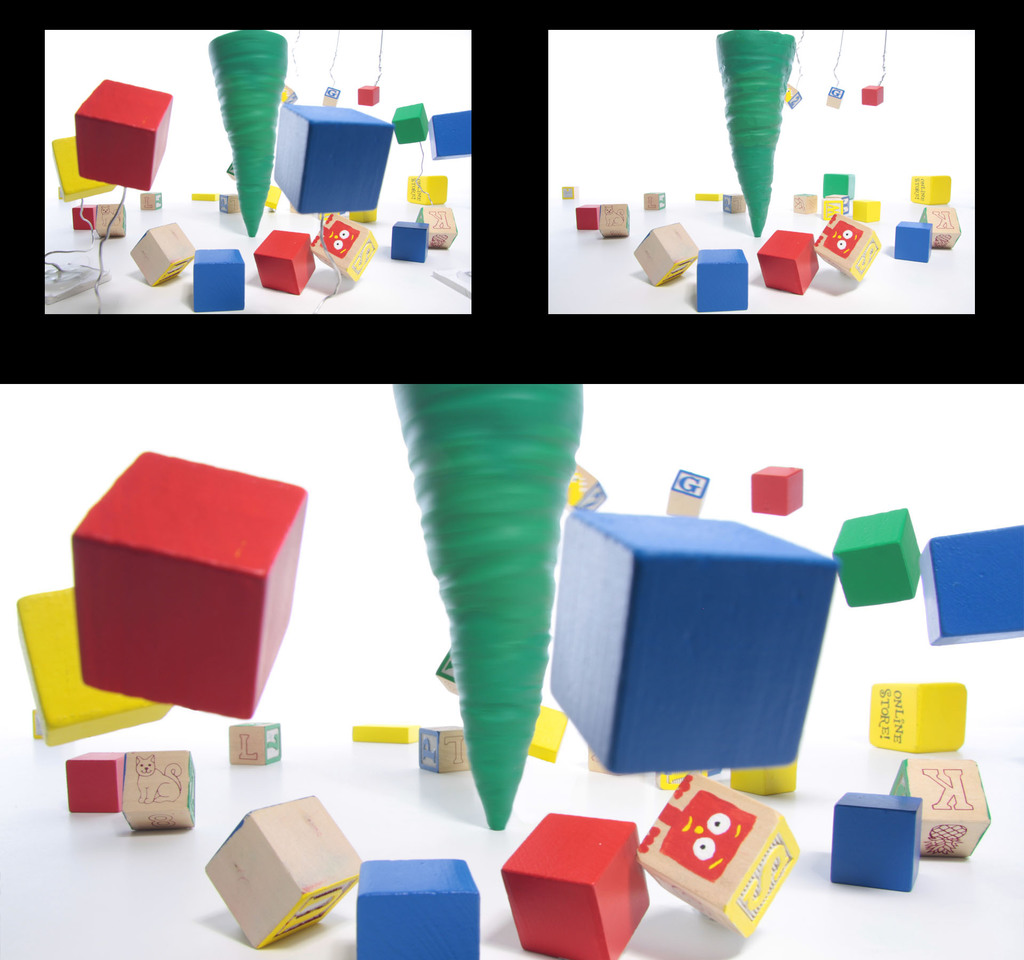 I've taken a break from animating the shot for a few days to learn more about rig removal in After Effects.  I imported the RAW images into AE, animated a mask to remove most of the rod, which revealed the clean plates beneath and used the eraser tool to do the finer work.  Here are the results:

Here is a short video explaining the complicated rigging involved in this shot and Dragonframe's multiple exposure option I am using to shoot Clean Plates.  After several tests in After Effects, I've been able to remove the supporting rigs successfully, largely due to shooting proper Clean Plates as I animate.

I've hit the 500 frame mark on Shot 10 so here is a time lapse with all the frames comped in.  After 2 months of shooting, the blocks have stopped and the wall is complete, next week I start animating Gumby and Pokey.

thanks Steve, it may be awhile before I finish since I'm working at a leisurely pace.  I like the idea of using this blog to track the progress as I go.  I've got a couple more things to post fairly soon.

Added a rough animation test for Shot 10 to the GLog today.  This test will help to inform me on what is working and what is not.  Almost ready to start shooting the final shot.

I've been shooting camera move tests with the manual track and tilt rig today.  I've uploaded a video showing the best of these tests to the Gumby blog.  I am just about ready to start shooting the real shot on Monday.

Getting ready to launch the first hero take of Shot 10.  Doing final checks on focus, locking down props and getting the bouncing ball rig ready.  That first frame is always the longest!  I am also shooting a time-lapse from this angle. 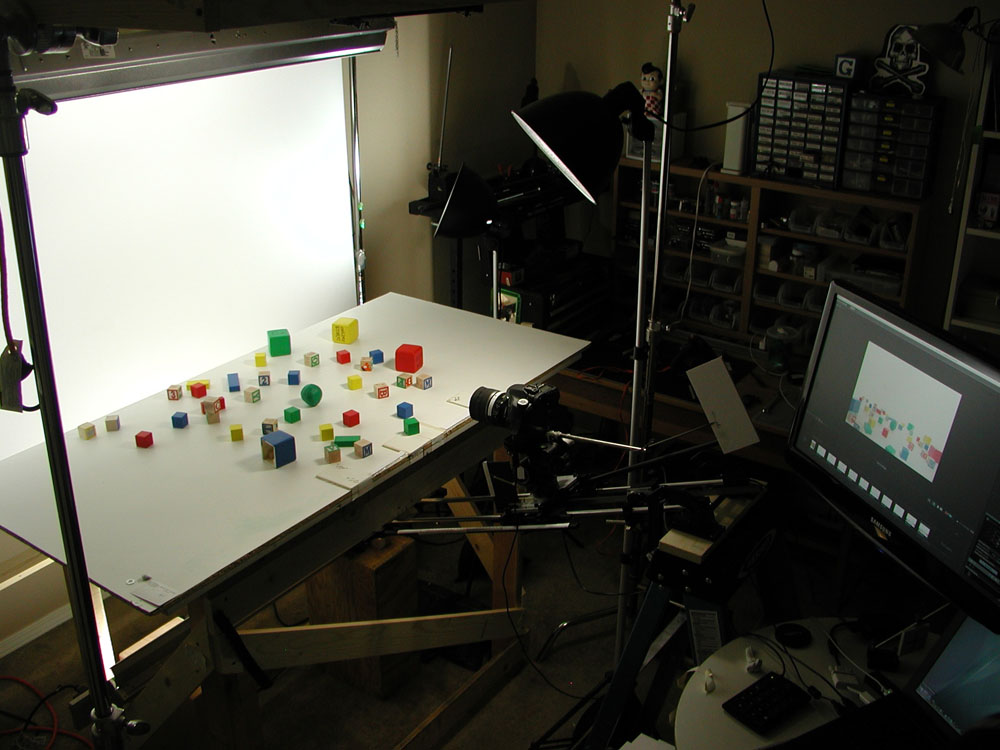 So true about the first frame.   Actually, the first second seems to go very slowly, then it gets better.

Comment by Anthony Scott on February 26, 2013 at 9:04pm
Thanks Nick. A lot of planning and testing has gone into this huge shot. Complicated rigging, manual camera moves, clay morphs, it's going to be fun but it's going to take me a long time to shoot it. I am still getting it ready but it's almost there. Should be ready to shoot the first frame tomorrow morning.

New on the GLog today:  a photo of a registration system I am using in Shot 10 to ensure precise alignment and composition.

I've shot over 200 frames for Shot 10, nearing the end of the Morphing sequence, which means I am about a third of the way through the shot.  Posted some new photos on the GLog today.

Posted a video update to the GLog.  A time lapse video of Shot 10 in progress.

Anthony Scott replied to Erin's discussion SPAM/Phishers
"I just moved the Watch Out notice up to the top. Thanks for reporting."
yesterday

Anthony Scott replied to Erin's discussion SPAM/Phishers
"It's down below the New Feed. See Watch Out, then click on Notify Me. I'll make it more…"
yesterday

StopmoNick replied to Erin's discussion SPAM/Phishers
"That exact same message appeared and was reported last year, but will be using a different account…"
Friday