Ok guys back with yet another question!

I am using silicone deadener at the moment to soften the puppets, which will hopefully allow for slightly more range of movement round the joints but I am getting slightly worried about just using silicone due to the overall weight of the little fella!

I know I there is some kind of silicone that forms a foam I believe It's called Soma Foma, but I don't really have access or the funds for that. I tried a puppet a while back that had a foam wrapped armature then cast in a silicone surround, however the puppet bent un naturally and it came out pretty bad.

Does anyone have any solutions for a good material to back fill the mold or any other method that might offer a solution? 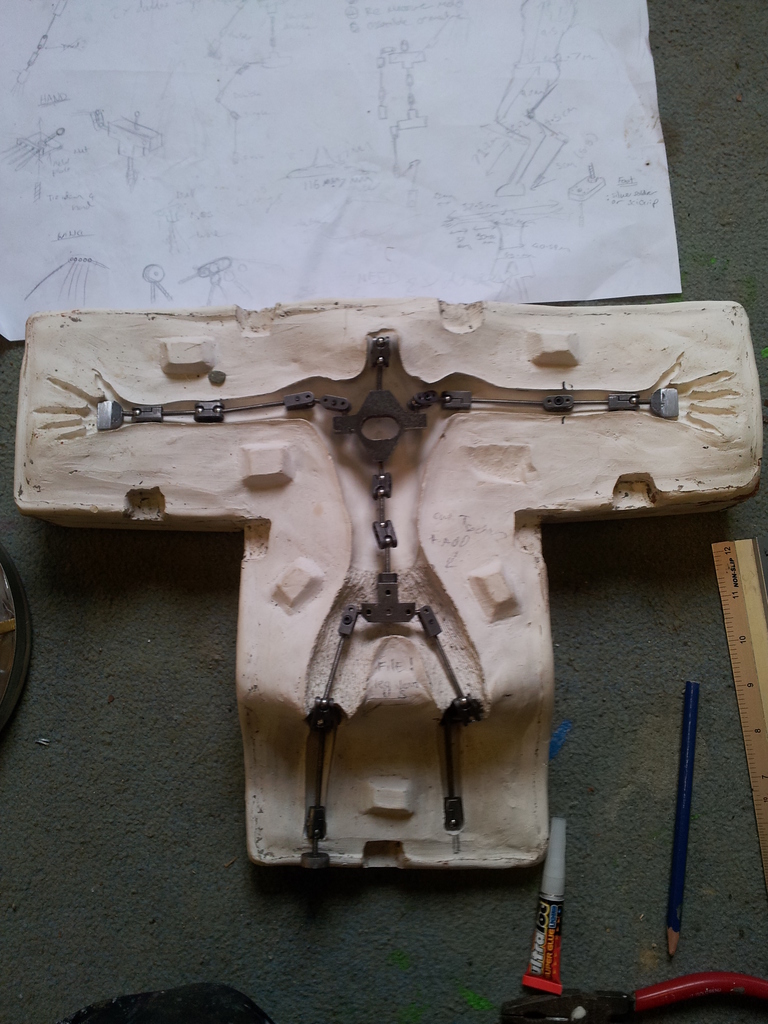 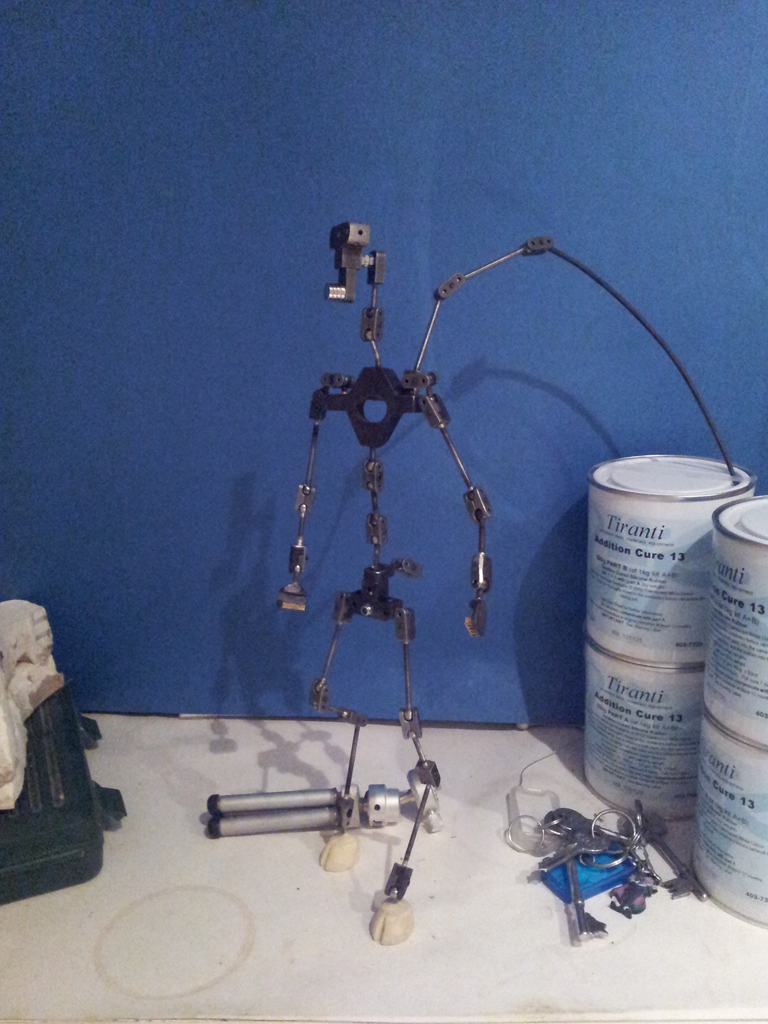 what kind of silicone are you using now?

I am using an addition cure shore 13 silicone from Tirantis, the deadener is from MBFG.co.uk but seems to work with any platinum based silicone or at least with this one.

Mmmm too bad that's platinum cure - if it was tin cure you could first fill the mold with foam latex and then trim off the outer surface and put it back in the mold with silicone to make the outer skin.

I don't think it works the other way - by painting a skin of platinum silicone into the mold halves and then backfilling with foam latex - if I remember right the foam latex won't adhere properly to the silicone if you do it that way and the skin will just slide around loosely. In order for them to bond to each other it needs to be foam latex first and then silicone - the silicone will stick to the latex but latex won't stick to cured silicone.

you could get a sample kit of the soma foama, a little bit goes a long way and it's not really that expensive and waaay easier than foam latex. You could also look into tin based silicone foams.... Silpak carries that here in the US

For a skinny puppet like that, I think you could usually get away with pouring in solid silicone and it would still work.  Lighter would be better, but it's not too bulky.  But those are pretty fine balljoints so I don't know how much they can be tightened to take the weight.

Here's my very limited (and not very successful) experience with silicone:

I just completed my second attempt at a 11" silicone Sumo wrestler, using cushion foam on the armature to bulk it out, hoping it would reduce the weight and make it able to bend at the waist a bit.  The first one was Platsil Gel-10, and was way too stiff and way too heavy for my 2 strands of 3mm wire in each leg to support.   The extra cushion foam in the second one didn't work.   It's as heavy as the first attempt, and actually feels firmer in the belly where the most foam is.  I think what happened is the foam soaked up the liquid silicone like a sponge, and is now re-inforcing the silicone and making it stiffer. I even painted a layer of silicone onto the foam first, to try and seal it so it wouldn't soak in, but I don't think that worked. It's now cast in Ecoflex 00-30, which is softer than the Platsil Gel-10, but no lighter.   Both are platinum cure, so I couldn't cast in foam latex and trim it back, then cast silicone over it.

Before the sumo guy, I cast a female figure in Gel-10, and while heavier than the same figure in latex, it is able to support itself on one foot while walking, without going to the extra-heavy armature wire.    It is roughly comparable to your devil in mass to height ratio, but I suspect the 2 strands of 3mm wire are stiffer than your small ball joints.  So reducing the weight is probably a good idea.  Balsa wood in the chest region, where it doesn't bend, could help a bit, but you have a long spine with a lot of joints, going up fairly high, so that rigid section is small.   (Possibly too many joints - I did that many spinal joints in a Kong puppet, and the spine kept jackknifing - going into a zig-zag shape.  I had to cut it open and tape wire alongside the spine so I could animate it without it collapsing.)

Possibly the Soma Foama is the only way out for filling a platinum silicone skin.  I think you should try a sample of it.   It's not available in Australia so I haven't tried it, and it will cost me a fortune in shipping to get some, but Ron has got some good results with it.

Myself, I would cast a devil puppet in foam latex.  I haven't managed a really successful full body puppet in silicone yet.  I just made a harpy which is very demonlike, and it's foam latex.  The lighter weight makes it easier to support on the flying rig, the wing membranes are liquid latex and can be blended into the arms and body.  Normal paints and spray glues work on it.   But it depends on the design, if he's already sculpted as wrinkly or scaley the wrinkling is not a problem, but if he's smooth it can look ugly.

I did a studio scale King Kong puppet ( 18 inches tall ), using the soma foama as filler and it works wonderfully!!

That Kong is as bulky as my Sumo puppets,  thicker in the arms and legs, proportionately less fat in the belly but given that it's a bigger puppet, actually thicker in inches.   And bigger scale puppets get heavier in relation to the strength of the armature. So clearly, if your Kong can bend, and support himself, the Soma Foama has to be the best option.   Have you animated it, or is it just for display?

Going to be animating the big guy soon, but he can hold any pose that the original Kong could do no prob!

Permalink Reply by will mundell on March 6, 2013 at 3:30am
Excellent info as usual guys, I will reply with a slightly more detailed response a bit later when I'm not on my mobile! But a big thanks for all the help so far

Permalink Reply by will mundell on March 7, 2013 at 12:35am
Nick great idea about the balsa to pad the armature, will definatley try that. Have also removed a joint in tbe torso as I think u were spot on with that too, I was worried that one joint wouldnt allow the puppet to bend enough, but if the silicone works well I should be able to pivot from the hip joints when he needs to sit down etc. that should allow me to pad out with balsa a bit more and reduce weight.

You might be able to fill it with a soft,expanding urethane couch foam,or Soma Foama?

Thanks John, I have some Flex Foam sitting here from smooth on but i imagine it will give me a similar problem with unrealistic bending and wrinkles, because the foam is soft it tend to compact a lot taking the silicone with it and it just doesn't look right. I need to get me some of this soma foma to experiment with.

I think that for this puppet I will use the balsa and silicone deadener method, I have changed the spinal block of the armature to allow for more balsa to be used, cutting down on weight and silicone.

The information on how is likely to cover current-generation consoles just (PlayStation 4, Xbox…See More
12 hours ago
0 Comments 0 Likes

David Tomasiewicz replied to David Tomasiewicz's discussion CGI and Stop-Motion Project: MotoDrop
"Thanks, Nick! I had his book nearby the entire time I was working on this. I need to adjust some of…"
15 hours ago

Simon Tytherleigh replied to Julian Smith's discussion Tracked Motion Control Rig with Model Mount
"That would be great!"
22 hours ago

Julian Smith replied to Julian Smith's discussion Tracked Motion Control Rig with Model Mount
"Finally on here.  If I come up with something that could benefit us both, perhaps we can…"
yesterday