Choice of sculpting materials for moldmaking

Hello, I haven't done any moldmaking but would like to try it. I've seen Nick Hilligoss's great video here: https://www.youtube.com/watch?v=5fWdZnQRzB0. My understanding is that I'll sculpt in one medium (eg NSP) and use another (eg water-based clay) to define the two halves of the plaster mold.

My question is, is there a rule for deciding whether the two clays will stick to each other? In the video it seems important that NSP doesn't stick to the water-based clay.

You want it to sort of stick, enough to stay in place while you make the mould, but not mix and be hard to remove cleanly when you peel away the wall to make the second half of the mould.

The water based clay is good for the wall because after you peel it away, you can wash off any residue with a brush and a little water, and the water will not affect the NSP.  I also use a mix of clay and water to brush on the first half of the plaster mould, so the second half won't stick.  A cheap, effective, and non-greasy release agent.

But sometimes I make a mould from polyester resin (for casting in silicone), which won't set if it comes into contact with moisture, so water based potter's clay is out. For those I use another oil based clay for the wall.  I got some Kleen Klay which turned out to be too soft to sculpt details in, so I use it for walls.  Soft means when you press it against the sculpt, it conforms, rather than deforming the sculpt, but regular medium grade would still work if it is warmed in your hands, but the sculpt is cool.  With those resin moulds, I generally put release agent on the plasticine sculpt, so the Kleen Klay doesn't get a chance to blend with the sculpture.  With epoxy resin moulds, the moisture is not a problem, but I still apply release agent and use the Kleen Klay.  My usual release agent is usually - 1 coat of shellac, to give a good dry surface.  1 coat of mould release wax, let it dry.  i coat of pva release agent, which dries to a thin film that washes off easily in hot water.  One final coat of wax.  It does mean that after I remove the BSP from the mould, I have to scrape off and throw out some of it because of the shellac on it.

Usually the NSP peels away from the plaster mould pretty well, but occasionally I have had it stick - maybe the plaster got too warm when setting, and some of the oils soaked in to the plaster, so the clay stuck. Then I have to do a lot of scraping and brushing with solvents to clean the plaster mould out.  That is worse when it is a very detailed, textured surface.  So sometimes I put release agent on a sculpt that will have a plaster mould made on it.  This sculpt is shellacked and coated with pva and wax (the plasticine underneath is actually greenish grey Roma), so I could have used either water based or oil based clay for the wall: 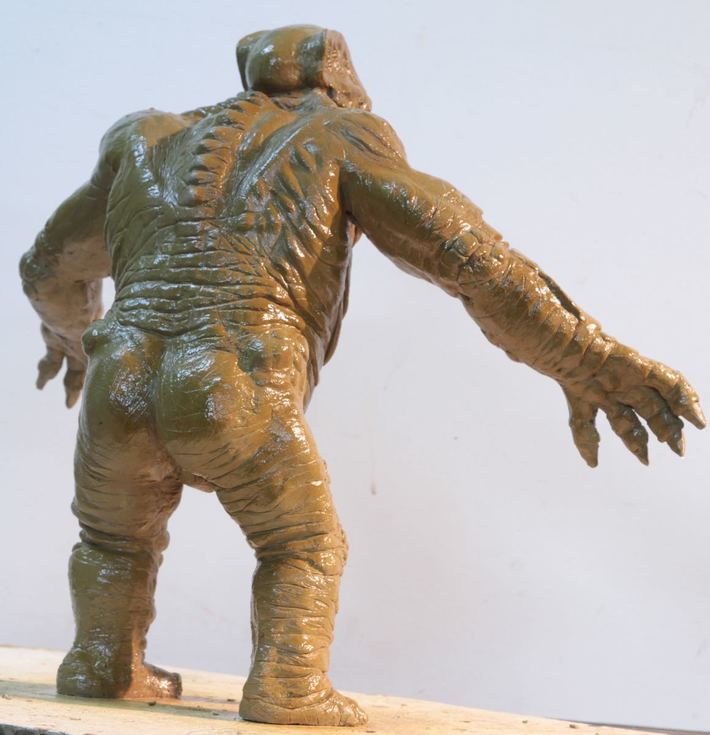 Nick, thanks for the thorough reply. I'll keep this info in mind when I try it.

I also use Chavant NSP for sculpting and water based clay for the bed. I like to get the water based clay to a consistency where it is soft but not glutinously sticky. If I have any concerns about damaging the surface of the sculpt, I put it into the fridge or freezer for a while to cool the NSP and make it as hard as possible.

But definitely the best characteristic is being able to dissolve the water based clay gently away to preserve the mould and sculpt.

I have also occasionally, when trying to get a deep sculpt out of a -plaster mould, put the thing in the oven to warm gently and soften the NSP. But as Nick says, if it gets too hot the oils from the clay can penetrate the plaster and make it much harder to remove. So take care if trying this!

a citrus based cleaner like Goo Gone or citra-solve is good for cleaning oil based clays out of stone molds. it's also a decent solvent for smoothing oil based clays. if you do use any kind of solvent on your clay sculpt, maybe let it sit around for a couple days to evaporate out before you try to mold it so the surface is harder.

if you're buying clay from a pottery supply place, see if they have ultracal 30. if you end up liking mold making ultracal is stronger than plaster and has a longer working time. ultrastone is just fancy plaster for slip casting and isn't much better for what you are doing than hardware store plaster of paris. You can get small containers of plaster of paris from most hardware stores for a low commitment. ultracal tends to be only be in 90lb bags but it's cheap. if there's a million clays to chose from i'm a fan of "o4 white earthenware" but only because i remember it's name, any clay will work. if you're ordering clay get WED clay.

when you mix plaster, you put the water in first and then shake/sift in the plaster powder. don't stir until all the powder is in. sift in the powder and let it settle when you tilt the mixing container there should be a very thin bit of water above what now looks like cottage cheese below the surface. it won't start to react until you stir it so you're not in a hurry to sift in the powder. don't stir until all the powder is in. don't randomly add more water or more powder after you're started mixing, it won't bond properly and will a weak mix. when i stir plaster i use something flat like a craft stick or flat spatula and slice back and forth so i don't whip in air. if you hit the sides of the container with the stick as you slice back and forth it will knock up air bubbles.

Reviews help me my video