In 2012 I did my fine art bachelor, and since than i fell in love with stop motion animation, despite i had never done any. I decided that i will do a computer game, which will be a side scroller. I wanted to learn all about the process of making stop animation - through making the puppets and sets, animating them, learning what i need from photography and so on. My main material is metal - this involves cutting, welding and sculpting it with a hammer, but i also include other things that I find visually attractive.

It took me a long time to get here, because learning how to animate human body without starting with the basics was very hard...and stupid. I spent days without being able to make my animations correct, but this never stopped me.
On the technology side, I already knew Photoshop, but started reading books about game, level and character design, storytelling, and also getting familiar with Game Maker, and afterwards - Unity, which are engines for making games. I know also a bit of programming, but nothing serious.

Now, a few words about the project. The game is called Mirabilia, and is situated on a distant planet, inhabited with humans, that don't remember their past, or where they come from. The main character called Eon, who in the past was a buddhist monk, wakes up from a cryogenic sleep in a society that lives in a somewhat steampunk setting.
Buut, ofcourse a disaster happens, and you have to save the world

Making the puppet of the main character was a lot of fun for me, as it was my first time. Here are some pictures:

The armature is made from alluminium tubes stuffed with wood, in which the joints take place:

The facial expressions: I sculpted a head from clay, than changed it for every expression, and made molds from PVC foam, covered with acryllic. The foam cannot take alot of detail, but its ok in this case, as the main character ingame is 175px high. The eyes i made from clay, painted white, with a glossy finish:

Last winter there was a contest for a comix, made with clay. I thought this will be a good opportunity to make a tryout for my first set. The theme was very distant - "The magician and the tablet". Despite of that, I wanted to make a temple for my monk and somehow connect it with the story in the contest. The set was made from styrofoam, than molded into gypsum and covered with clay. The texture of the styrofoam, after blown with a hot air gun resembles stone surprisingly good. The windows are made from glass, covered with glasspaint. Some pictures from the process:

I wasn't able to shoot while covering with the clay, as everything was very messy, but basically i melt it in a tin can, and applied with a brush. The other option is to do it with a hot air gun, and a compressor, but you have to be very careful with temperature there, otherwise the clay gets burnt. It was also not from the best ones, so it wasnt sticking that good. Anyways, the final result:

I didn't won the competition, but anyways - I shot the set and turned it into game sprites.
For every sprite you need a few pictures with different focus, otherwise the things get blurry. Afterwards you combine the focused areas in one image. Here is the already shot set in Photoshop:

This was just a tryout, but to be honest it worked out pretty nice ingame.

So, back on the game itself.
For now all the animation states of the main character are done. While animating, it must also be taken into consideration that every in-and-out frame has to fit with the entering and ending frames of the animations it is connected to. For example - there is a looping animation while the character is in midair, and there are two frames on the end of the sequence that are played once he touches the ground, and switches to running/standing/whatever other mode. This is a bit shaky, but i had no nerves to fix it in the big file, because as i said - its 175px high ingame, and this shakiness disappears when resizing the image:

To FX - i shot explosions, fire and steam. The explosions are a deodorant burning, the steam is just steam, sparks and flames were shot on a bonfire once:

One of the dying states:

After finishing with the main character, this is the first mob, that we made:

Falling from the ceiling:

Due to the fact, that the spider jumps on the player to kill him, i had to make animations for all the states the character can be in, while grabbed by the spider. Also, they had to be made for the character facing left and right, as he is not symmetrical, and also add the flames, steam and sparks afterwards. This was a very, very long process. I'm glad it's over. The animations still need some color correction, but i will do it once we're done with shooting and implementing the sets in the project, because i am not sure how things will look like in Unity:

Now i see that the steam on the back must be fixed, but whatever

In the game there are some parts that need animation as well, like levers, workbenches, and other stuff. The ones that are usable by the player have to be shot seperately for gameplay purposes:

Part from the scenery: 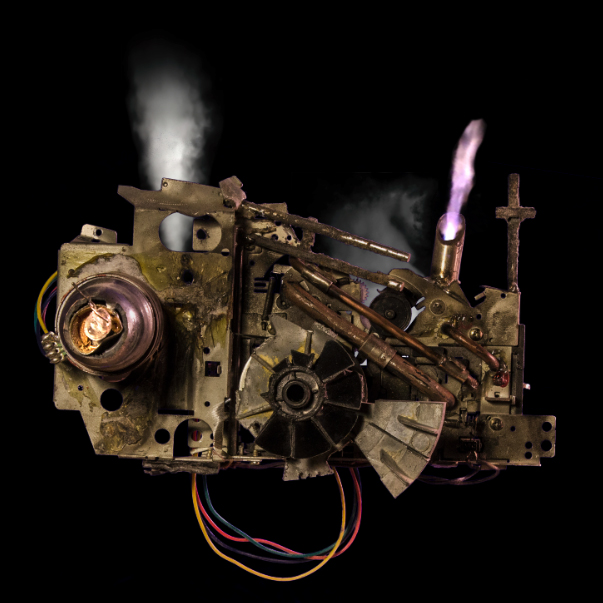 And this is a workbench for upgrading the suit:

One of the other mobs:

Last three days i was working on the first screen of the game.I've learned alot about how it is going to be made and shot, plus it was fun.

Lot of things didn't happen like planned, but i am going to use the objects in the future as well, so its not a real problem, just gave me a different perspective on the final view.First, ofcourse everything has to turn into a mess, otherwise no job can be done:

The welding corner i try to keep clean all of the time, because making photography and cutting metal in the same room is a bit tricky:

It took me three days to complete all the objects from the first screen. The walls i intend to use later on for the other 29 rooms, because it's getting a bit boring to make more and more from the same thing, and it also costs. I'll cut the styrofoam and rearrange them like

Afterwards everything was greenscreened seperately with the same light, so i can put the objects into the scene: The library was shot two times in different positions: When composing the scene afterwards, I realised how the player is going to move through the space inside - for a starting screen it was getting too cluttered with objects. So i needed some rearrangements, that I managed to do in Photoshop. This is the final result, can't wait to see it move! :) Thank you for sharing this. It is really interesting to see what you have achieved, and I hope you can post some more shots as the project progresses.

We currently have some problems with scaling all the backgrounds right ingame, so i made this Health-o-meter. It was more matte painting than stop-motion, but anyway...:) 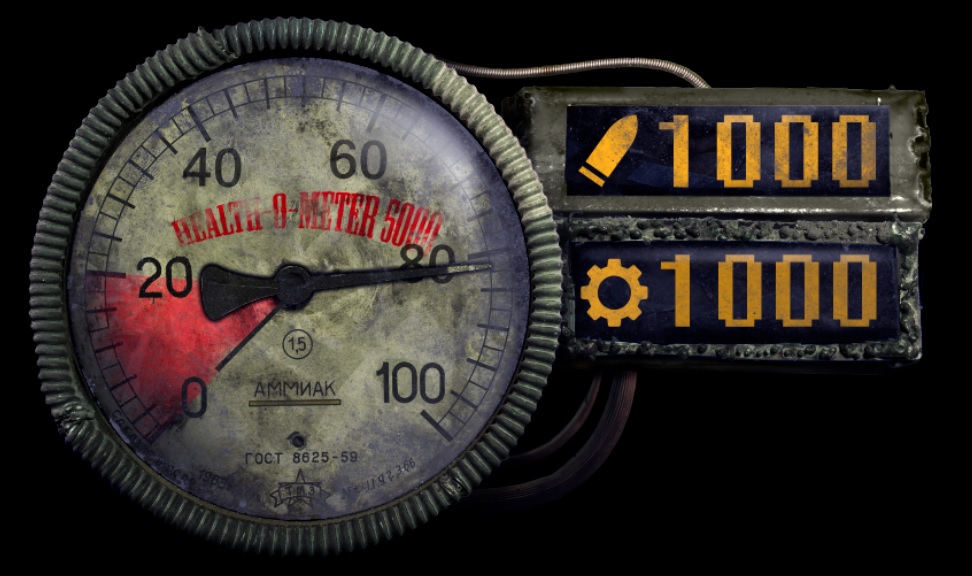 Hopefully I got the scale right. We'll see :) Production timelapse:

I've done alot of mistakes rescently, which turned into alot of unnecessary work. Despite of that, this is very close to the final result.

These are three screens of the game: 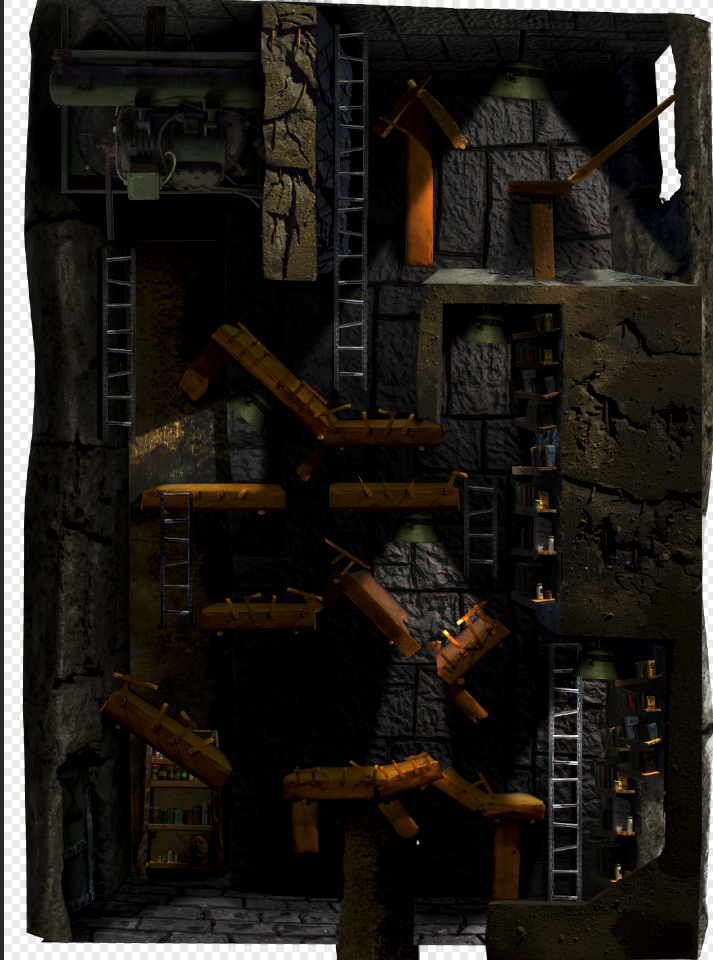 Anthony Scott replied to Erin's discussion SPAM/Phishers
"I just moved the Watch Out notice up to the top. Thanks for reporting."
yesterday

Anthony Scott replied to Erin's discussion SPAM/Phishers
"It's down below the New Feed. See Watch Out, then click on Notify Me. I'll make it more…"
yesterday

StopmoNick replied to Erin's discussion SPAM/Phishers
"That exact same message appeared and was reported last year, but will be using a different account…"
Friday