I'm one of the developers of OpenToonz, a free and open source 2D animation program.  I recently overhauled the stop motion capabilities of the program.

Please test it out and let me know what works and what needs tweaked.  It supports webcams and Canon DSLR cameras.

The test version is only released for Windows right now, but we have also tested on Macs and it works too.

You can try it out here:

Permalink Reply by Antonio J. Cebrián on July 29, 2020 at 5:05pm
Thanks, Jeremy. I downloaded it and looks awesome! I am on holidays now and only can test it in an old pc. Drawing gets important latency and got some unexpected program closings. I think due bad updating of windows8. Next weekend i will return home and will test it in my main system.

This looks interesting.  I've tried downloading tahoma but it's asking for a couple of dll's: MSVCP140.dll and vcruntime140.dll.  Am I doing something wrong?

I tried Beta 5 and there were other dll's missing.

I also tried the regular 1.4 of OpenToonz and saw that the webcam seems to work with that, so for the moment we're ok.  Thank you.

Thank you for your offer to help us out.  At the moment we're just feeling our way through OpenToonz and other programs.  We still have some hardware decisions to make, too.  I look forward to exploring Tahoma when we're a little more settled and can appreciate its advantages.

I've got 3 computers running windows 8. In the main one (without internet connection) Tahoma works OK. In the others I receibed a lot of "missing DLLs" messages. I got tahoma working in one of them doing about 50 pending updates to the windows. In this PC some operations like saving a brush preset cause the program close without previous warning.

In the third PC it doesn't work in any form. The missing DLLs message dissapeared when I updated the system but running program causes the error of the image: 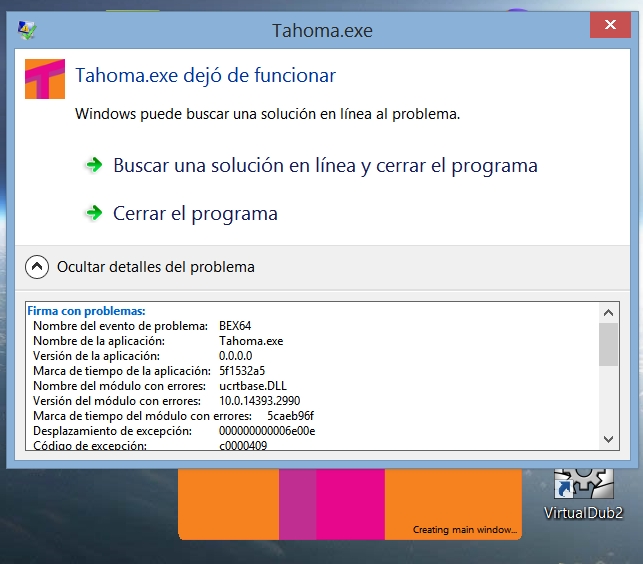 It indicates error on ucrtbase.dll. I don't know if this helps in any form.

I think it works in the main PC (that is not updated but has a lot of programs installed) due some program installed a library or DLL or something that Tahoma needs.

At the moment I am very happy with the program working in my main system. I will notify if have some trouble or malfunction.

Thanks for your amazing work

Have just downloaded the 1.4 version of Open Toonz to try as an alternative to Dragonframe.

I have a Canon 450 D. The live view screen opens but there is no response when I try to capture, nor is there a response from the zoom control.

I noticed on your youtube clip;'OpenToonz-New Stop Motion Features' that the words 'Stop Motion' appear in the top task bar next to 'Basics'. This does not appear on my screen. I am wondering if I don't have the right version or possibly add-ons to make this function properly?

Any help would be appreciated

That would be great! How do I go about checking it? I am a bit of a novice at computer tech.

450D is an older model that uses a different command to take pictures.  I'll add a fix to Tahoma.  Would you be willing to check it?

I tried to check Tahoma to see if it worked with my Canon 450 D but it didn't open. Wasn't sure what to do with the 2 zip folders? Do you have a simple you tube  video for dummies on how to down load it?

Wow!  This version works fine in all my computers!

Thanks for this wonderful tool!

Tahoma version 1.0 is now out.  Allen, I think I got support for the 450D in there.  To use it, you download the zip file, unzip it, and run the Tahoma program inside.

1.0 has support for Canon Raw now too.

Hi! I will test the tahoma!

I've installed Tahoma on a 2013 iMac running OSX 10.16.7 Catalina, to see how it works for my stop motion needs.  This computer is not in my studio so I wasn't trying it for capture with a camera yet, but i wanted to see how it works for processing images previously captured - like I would use TV Paint Animation or After Effects.  I set up a project at 1920 x 1080.

Looking at the manual, I didn't see a section on how to import images. It seems to be mainly about drawing, as I would expect, with some bits about scanning - does it work directly with the scanner, rather than access images that have already been scanned and saved?

In the app itself, there was no File>Open, and File>Import only allows one kind of import, Toonz Lip Synch File.  I see you can Export a stop mo image sequence, why not Import?   I tried in each room, 2d, stop motion, Timing, FX - but that didn't change. So I tried clicking on Import Toonz Lip Synch anyway, just in case it was mis-labelled and could import a variety of file types.  I could see folders, but not image files.  I have several sequences of 1920x1080 in jpg and PNG format, and several QT mov files in Apple Pro Res and H264, but none are visible.

I was ready to give up, when I spotted File>Load Folder.  I was able to select  folder that I knew had a sequence of HD images in it, though I couldn't see them.  As they loaded I could see the images click through and then stop on the last image, but have not been able to scrub back and see any previous frames. The frames are all shown in a vertical list in the bottom right, with the last frame on top and 3 previous frames visible, and after some searching I found a slider on the opposite side of the screen that let me scroll down to the first frames, but clicking on one of them did not display a different frame in the main window.  Forward and Back arrows on the keyboard don't do anything. Clicking the Play, Previous Frame, Next Frame, Back to the start, and Forward to the end arrows don't do anything.  So at this stage, I'm stuck looking at the last frame.  Compared To my real-world handcraft skills i am a bit stupid in the digital realm, so maybe it's just me.  But I picked up the free Da Vinci Resolve pretty easily, because it is similar enough to other editors I have used that I don't have to learn totally new terminology or different locations for the same functions.  The learning curve only gets steeper for those features that are unique to that software.

I have other software I can use, but most of it is a bit pricey, and I can't really recommend them to beginners, students, or anyone without a wad of cash to spend.  This looks like it ought to fit the bill, if I can figure it out.  Others seem to be able to use it, so the tools must be there somewhere.  Maybe it follows the conventions of other 2d apps, which are very different to the image editing software I am coming from.

Reviews help me my video