I´m planning a film now that requires me to use VERY SMALL characters. The set/location is fixed and a character would need to be no higher than 8cm in height...

Therefore I'm not expecting super quality movement (No articulated finger joint LOL) And at this stage I can design characters around the best techniques.

I was wondering what tips you guys can offer me?

Things I am thinking about.

I realise the best advice might be "don't do it" but I'm dealing with a particular scale here, I'll reveal when Im more underway.

I normally have characters at around 200mm to 300mm tall.   But sometimes I make a 1:24 version of the set, so I have room for a whole street instead of one house, and I put mini-puppets in there. (And 1:24 model cars parked in the street.) Or i have small animals like rats or frog in a full size close-up set, then I make  mini version to put in the 1:6 scale set with the human characters.  They are 6 to 8 cm tall, and they do need to move to some degree and sometimes to walk.  But I can cut back to a closeup of the larger puppet for talking or more detailed actions. The mini puppet just needs to be able to start the action that i pick up when I cut in closer, or continue it a little when i cut back to the wide shot, they aren't doing the main acting.

So I would be tempted to say, Don't rely completely on your tiny puppets. Have bigger closeup versions of your small puppets and small partial sets, or key them over closer shots of your regular small scale sets.  For my recent Harryhausen 100th Birthday tribute I had puppets of similar size, representing characters of 3 very different sizes - a man-sized skeleton, a Cyclops who is sometimes bigger and sometimes man-sized, and a Talos-sized bronze statue who has to look much much bigger.  I didn't make a mini-skeleton to use with the Cyclops, or a mini-cyclops to use with the statue, or a huge closeup of part of the Talos set to use with the smaller characters. I shot the main puppets on green screen and keyed them into the Talos set.   That could be a way for you to get better closeups of your characters for some key shots, but still use the sets.  At 0:32 they are both small and keyed into the set:   https://www.youtube.com/watch?v=DxQIgPIXS0M

Often the mini puppets have a long wire on one foot that goes down into a hole in the set, and they take one step with the other foot, then I cut to the closeup before that foot with the wire has to move.  But some of them, like the mini-rats, had little foot blocks made of aluminium, just like my big puppets.  They were a bit cartoony so I could get away with bigger feet. And one frog puppet had a mouth that could open and close.  Frogs have a big head, and a big mouth, so that was possible even though he was only 6 or 7 cm tall.

I start with finer armature wire -  2 strands of 1mm diameter wire for each leg and the spine.  4 strands of 0.6mm wire - the thinnest I have -  for each arm, which means they had a thumb and 3 fingers, which looked better from a distance than 5 fingers.  The wire for the lower jaw was probably 0.6mm, it might have been 2 wires twisted together.  Eyes were either small beads or the heads off map pins, with some of those you can pull the pin out with pliers and you are left with a ball that has a hole for the pupil.

Bodies can be built up with epoxy putty (slow setting like Aves Apoxie Sculpt) in places that don't bend, and cut foam where they do.  Usually I put foam on all over and trim it back, then dab liquid latex over that.  For realistic humans in 1:24 scale the heads are tiny, and generally they don't have movable parts at all, I just build up shapes like the nose and ears by adding a drop of latex at a time and letting it dry. Bodies are the same, just blobbing on layer after layer of latex to build up the basic shapes.  But they are never meant to be seen up close.  If I can find a photo you will see why you wouldn't want to go close on them - found one!  But they were used in forced perspective shots, with a couple of 1:6 characters up close, and these guys are "extras" in a smaller scale set in the distance.  You could do better heads by sculpting in Apoxie Sculpt or Super Sculpey, provided you didn't need the mouth to move. 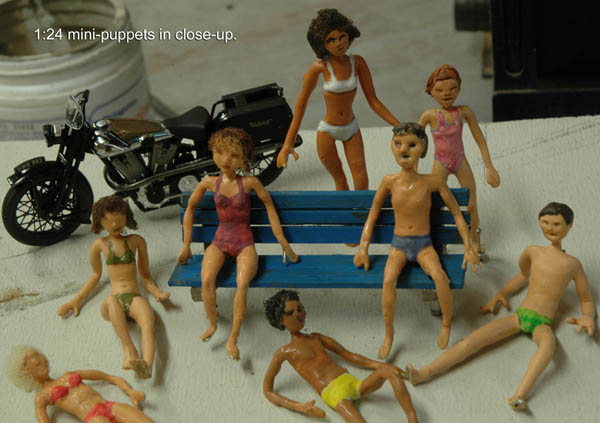 The mini people have a loop of wire in the foot, so I could put a sewing pin through it and into the set floor.   A small wood screw could also be used, to hold them more firmly. They didn't walk.

The rats did need to walk, though, and because their heads were bigger, they had more character. The wires don't last long, if they walk, before bending the ankle in the same place over and over causes the wire to break where the wire comes out of the foot block.  Because of the scale, if you bent it 5mm higher, you would be in the middle of the shin and it would look weird.  I don't put epoxy bones on the legs but still, you have to keep the bending to a small area for it to look good on camera.  Replaceable legs would be a good idea if you are using them for more than I do.

Magnets in feet:  Not the best way to do it, I suspect.  As the foot gets close to the metal floor, it snaps down onto it.  The usual method with magnetic tie-downs is to have a steel plate in the foot, and a strong magnet that you place under the sheet metal floor.  That way you can bring the foot as close as you like to the ground before putting the magnet under.  Also it is a bigger magnet than would fit in the foot so it is much stronger.  That would not work with a 12mm layer of particle board for the floor, and metal paint on it, though.  (Years ago I mixed iron powder into polyester resin to make a fibreglass globe that the continents, with plastic magnetic strips embedded in them, would stick to, and could slide around on to show movement of tectonic plates.  So you can make an iron paint that magnets will stick to. Just not sure if it is a good way to go.)

Because the mini puppets are so small and light, possibly a set floor made of pin-board material would work, you could stick pins in to hold the feet.  You might even get away with sticky wax if you are really really careful, but whenever I have a situation like that, sooner or later I bump something that I was carefully avoiding for 3 1/2 hours, and have to start over.  So I prefer small wood screws going down through the foot loop and into a particle board or wood floor.

Cloth:  Even at 1:6 scale (200 - 300mm tall)  it doesn't behave quite the same, at this size it would be like thick carpet.  I think better to make it as part of the sculpted puppet.  Though that doesn't work for a draped material like a kimono, so maybe tissue paper?

Permalink Reply by Mark Francombe on September 13, 2020 at 12:29am
Thats totally fantastic Nick, so much useful information.
Its a great idea about having 2 scales, I will definately consider that. My story concerns a family so although most action occurs outside, I might make the family and their home in CU. Great idea.
Ahh sucks about magnets, glad to get some advance warning. lll do some brief tests though.
Replacement legs... wow... i hadnt thought of that. You know, it even crossed my mind to 3D print the whole character (only drawbsck being yet another thing to learn) But with your suggestion, I could print a whole walk cycle... or at least legs. Even if 3d printing isnt used, great idea.

There are posable 6" (150mm) figures, male and female, that look pretty good. About a month ago my FB feed was flooded with ads for knockoffs of them.  16 different brands but all copied from whoever originated them.  Like this:  https://www.amazon.com.au/feelingood-Manikin-Adjustable-Figures-Ske...

That would work with the 1:12 dollhouse scale, so not the size you are locked into for your exterior sets.  Still hard to get fabric to behave in that scale.

I meant replacement wire legs for when the wires break, not the sets of different poses like George Pal's Puppetoons, but with 3d printing that does become an interesting option.

An example of what I meant about using the mini puppets in a limited way, with the bigger puppet doing the close-ups - a poor quality VHS dub of my old 16mm film Banjo Frogs is on Youtube.  This is the frog I referred to before. It starts with the larger 250mm frog puppet in a full scale set, at 00:14 cuts to the 70mm mini frog puppet in the 1:6 scale set I used for the human character, then at 00:17 cuts back to another closeup of the bigger puppet.    https://www.youtube.com/watch?v=ZZUeJ5TxBfc

StopmoNick replied to Erin's discussion SPAM/Phishers
"That exact same message appeared and was reported last year, but will be using a different account…"
5 hours ago