I have a project where there is a pond full of fish that will be moving and plants. I'll also have my character touch the water. I haven't built my character yet because I am unsure what is the best material if water is going to be a big part in my story and the character will be touching water and possibly even swim in it. The pond will have a waterfall in my Animation.

Hair gel seems to be the way to go, unless you want a very stylised look, in which case you could use polythene or something similar.

A challenge, but there are ways.  "How do U animate water" used to be a stock question here!

Anthony Lawrence made a stopmotion film set at the local swimming pool, which required rippling water in a lot of shots.  I was building the sets, so did some tests with cgi water to be added, but he managed to do it practical.  He had a sheet of clear perspex, some hair gel on top of that, and a sheet of cellophane on top of the gel.  He used his fingers to change the ripples every second frame.  It was fairly random, not flowing in any particular direction or a ripple following through in the same direction from one frame to the next. But that's what you get in a pool with swimmers disturbing the surface in different places, a random confusion of ripples, and to my surprise it worked really well.  I think doing it on twos (while the puppet animation was on ones at 24 fps) actually helped, in that it slowed it down a touch and paradoxically made it seem smoother.

Here's an interview with the director, saying how he did it, with a couple of images:   http://www.skwigly.co.uk/anthony-lawrence/

With the shot of Grace sitting in the water, the silicone puppet was cut in half at the waist, with the upper half above and the lower half under the perspex sheet. (It was a spare body, with the removable head used both for this and for the whole body.)  Shots of swimming underwater had the perspex and gel surface between the puppet and the camera, so it was shot through the ripples.  The poster shows one of those shots.  There were also some shots underwater, with the camera also underwater, that were shot dry.  They had the light coming through the ripple surface above, so the light rippled on the puppets and on the sides of the pool.

I've done ponds filled with clear wallpaper paste, so a puppet could swim or wade in it, but there were no ripples at all.  It only works for a very still forest pool.  As soon as you put a creature in it that ought to be causing ripples, it looks too static.  (And the foam latex puppets soaked up the thick liquid and needed a lot of washing out, so silicone would be a better material, but this was a long time ago.)

A waterfall can be done with a length of cling wrap scrunched into a narrower stream, and pulled down the stream bed a little at a time.  It could be a continuous belt with a concealed reel marked in increments at top and bottom.  Smearing it with hair gel might soften the creases and give it more of a wet look, and might also drip in slow motion to give some variation to the ripples as it moves down.  I haven't yet had a reason to try this but I'm pretty sure it would work.  I've used a twist of cellophane or cling wrap for water coming out of a tap before, and that looks surprisingly good without it even flowing out, just from changing it a bit each frame.  My tap didn't have a hole going right through it so I couldn't pull a long strip of film through it, or I would have done that.

In a waterfall, or any stream, there are usually fixed places where the water bulges up or makes certain patterns, so some smooth rounded lumps under the cling wrap could make it always follow that shape in that spot, even though it is moving over it.

Here's a shot, from a flashback scene of kids in a backyard above-ground pool.  This is another one where the puppet had to be cut in half, though I can't see it, a ripple in front disguises the join.  You can see the look of the rippled water surface seen from below, and the rippled light on the sides of the round pool.  A half pool was made for this shot, to get access.  For shots of the backyard and the pool from above, there was a full pool and the water surface disk could rotate each frame so the kids in the water were going around and around. 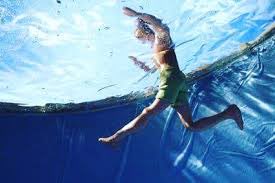 Sal Elder replied to Sal Elder's discussion Choice of sculpting materials for moldmaking
"Nick, thanks for the thorough reply. I'll keep this info in mind when I try it."
11 hours ago

StopmoNick replied to Sal Elder's discussion Choice of sculpting materials for moldmaking
"You want it to sort of stick, enough to stay in place while you make the mould, but not mix and be…"
11 hours ago

Maelvon replied to KC's discussion Camera Raw
"Great, and what is your workflow to convert Raw files to Exr? Thanks a lot, Maelvon"
19 hours ago

If you are suffering from a web page that does not hold audience, or a blog that has problems with…See More
19 hours ago
0 Comments 0 Likes