Lip sync in stop motion is a hard thing to do. Probably, one of the most difficult aspects of animation, besides walking. You alread have your animation planned, sound recorded, sets built, characters sculpted... Lip sync asks you to modify at least half of your puppet's entire face. What follows is an easier way to do this.

First, we will examine PHONEMES. This is the technical term for human speech when it is broken down into its most basic elements. To match what they're hearing on the soundtrack, animators will study their own faces in a mirror or use reference video of actors speaking the lines. Therefore, we will need our puppet's facial shapes to match what they're saying. To facilitate this, here is a chart: 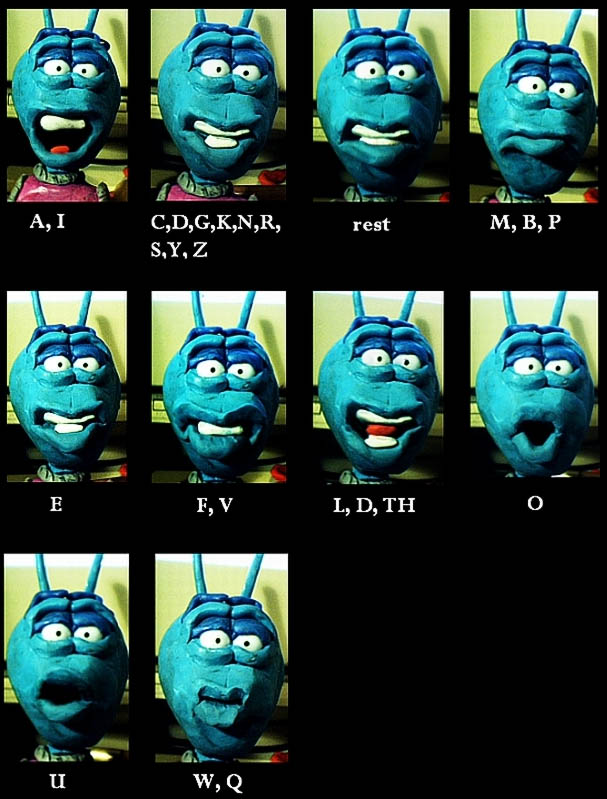 Note the tongue placement. For some characters, the tongue will be more or less visible; for example our little alien character here has a slight overbite. It follows that when he pronounces a hard "E", you won't see his tongue at all. Some characters might have an underbite, so when they say "E" you'll see their bottom teeth and very little or no top teeth. Singers are known for showing either one set of teeth or the other, but rarely both at the same time. So is the case in speakers. Dialog is much more complex than mere lip sync, but if you try an eyebrow furrow, you can get a very different emotional read on the same mouth expression. For this reason, only 10 percent of human communication is in the mouth. The other 90 percent is in the eyes.

If you work in clay, you've probably heard that you have to do a lot of re-sculpting. This has been the case until only recently. Now, digital photo retouching tools like Photoshop or The Gimp can simplify lip sync animation.

Here is a rundown of the process in GIMP: 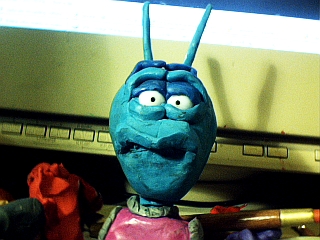 1) First, sculpt the upper mouth on your head. 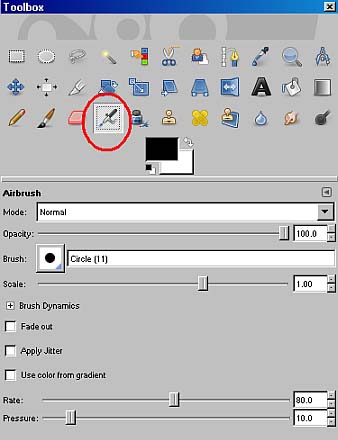 (4) In your tool box, select the Airbrush tool (circled in red). 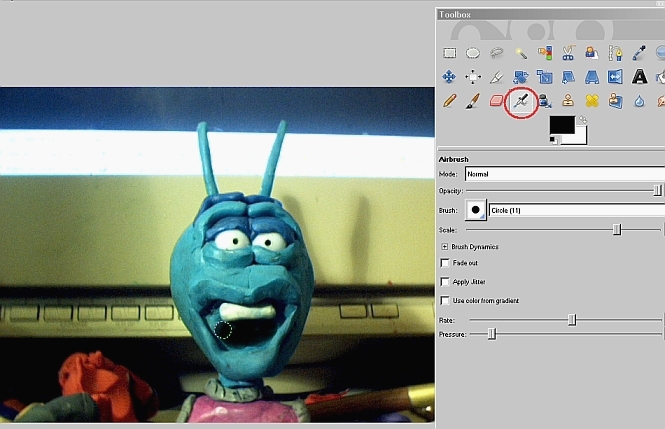 (5) Change the scale of the airbrush if you have to, by moving the slider on the right. Then, fill in the mouth around the upper teeth. 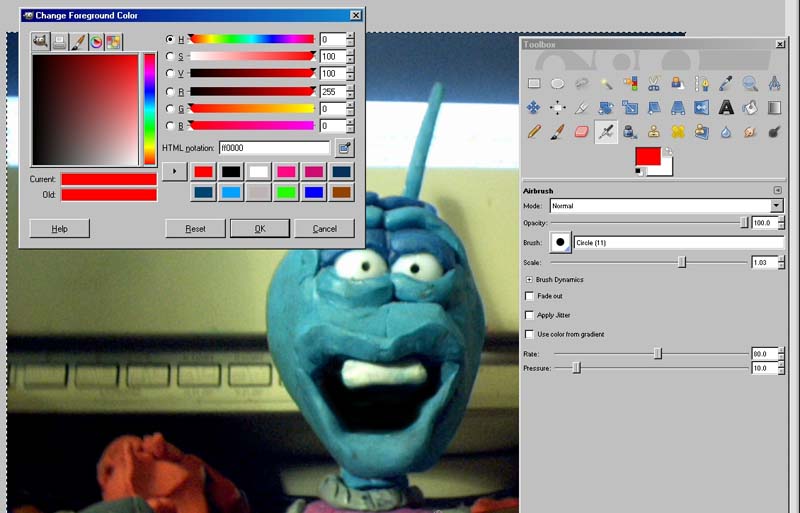 (6) Now, below and to the right from the Airbrush tool is a color picker. Click the box and change the color to red by clicking around in the big gradient window. 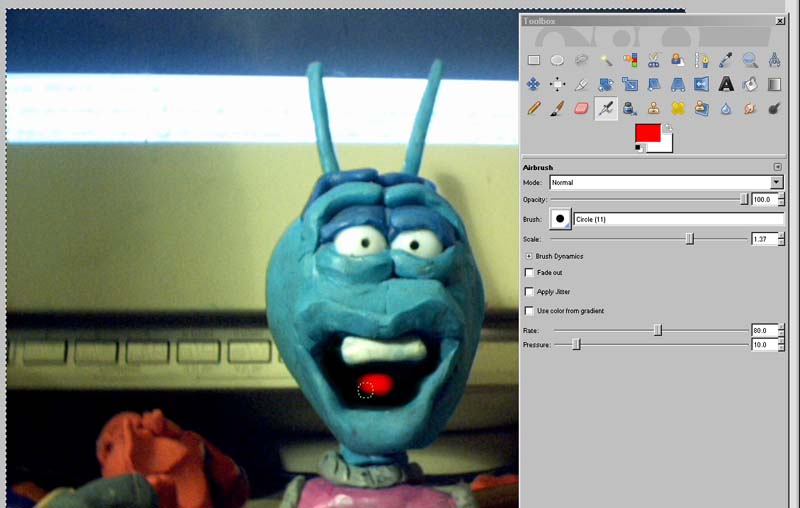 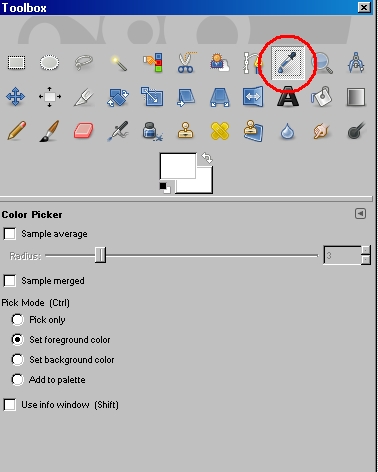 (7) Next, click the Airbrush tool again, and adjust the scale if you need to. Paint a tongue by holding in the mouse and dragging it around.

(8) Then, pick the eye dropper tool, (circled in red) and click on the teeth. Your color picker box will change to the color of the teeth. 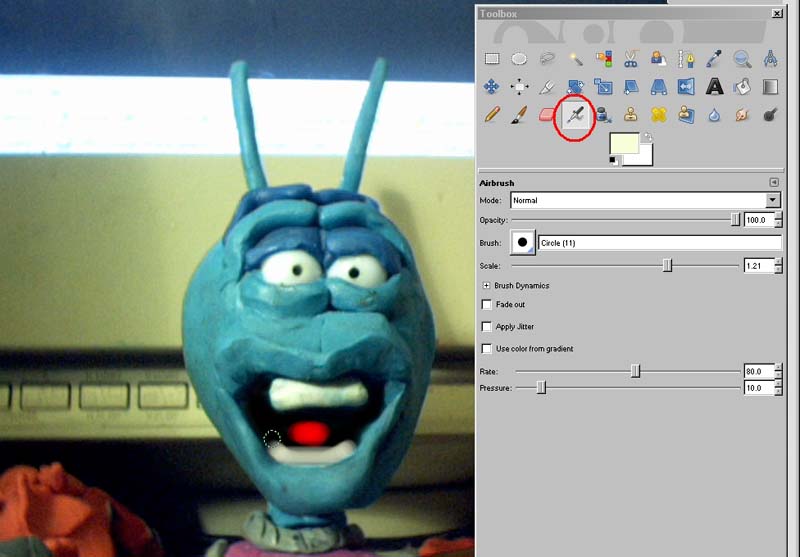 (9) After that, click on the Airbrush tool, and paint in your bottom teeth. 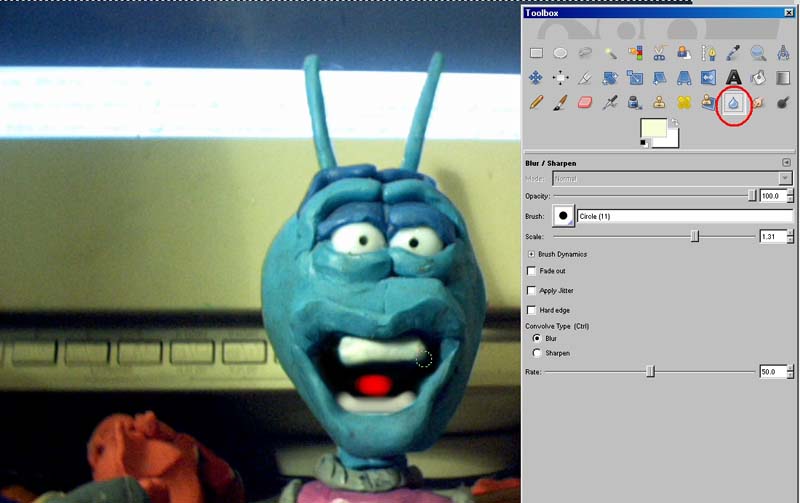 (10) We're almost done. Now, click the Smooth tear drop tool (circled in red) and drag it over the teeth and black areas of the mouth and tongue to blend it all together. Because lip sync is fast, a little blur won't hurt during playback. 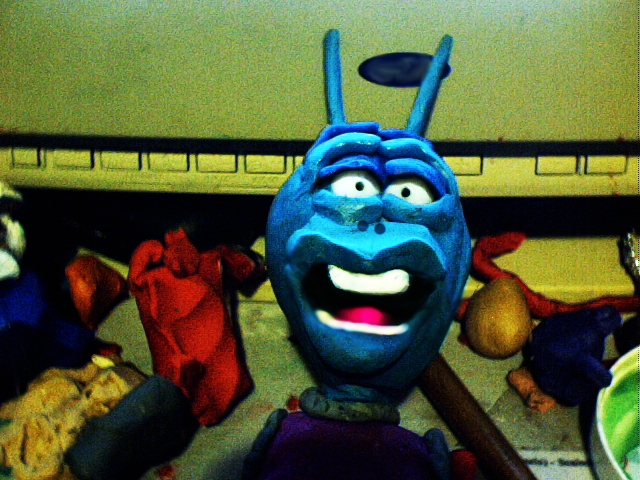 (11) Add some contrast, and you're done! Now repeat steps 1-11 for every frame your characters mouth is open. With a little practice, you should be able to average about 1 second every two hours. Fortunately, this is post production, so you puppet's mouth is already animated- you're just enhancing the inside of it.