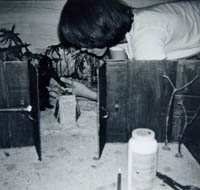 When I was a kid, I was intrigued with the puppet animation featured in the Rankin/Bass holiday specials such as Rudolph the Red-Nosed Reindeer. Simultaneously, I was amazed by Ray Harryhausen's creature films, my favorite being The 7th Voyage of Sinbad. However, it was the 1933 RKO film, King Kong that ultimately hooked me on Stop Motion Animation. Scavenging the libraries, I searched for books on the subject but there wasn't much to be found. By the time I was eleven years old, I had managed to animate my first stop motion film using a simple Super-8 movie camera.

Since those early days, I've worked on many stop motion animated film projects including The Nightmare Before Christmas, Corpse Bride, Coraline and The Little Prince. Even though I've been in the industry for over 30 years, I am continuously learning more about this unique and unusual art form.

StopMotionAnimation.com was launched in April 1999. Since then, it has become a popular meeting place for aspiring animators. If you are visiting for the first time, take a look around. There is a dedicated page for each member. The Message Board is the primary means of communication here. Post pics from your current project, links to YouTube videos, or simply ask a question. We have a good mix of beginners, professionals, and everyone in between. Thanks for stopping by. I hope this website is an asset to your stop motion projects.